The Vols added a 25th known commitment to the 2015 class late Wednesday night when 3-star in-state athlete Vincent Perry announced his plans to sign with Tennessee on Twitter. An RTI 3-star prospect, the 5-11, 165 pound Perry was offered by Tennessee in July and has since made multiple trips to Knoxville. He’s the eighth in-state prospect to commit in the 2015 class. 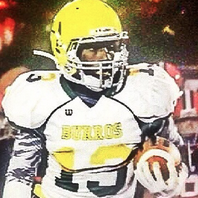 Tennessee and Kentucky are the top programs to offer Perry, but he has been receiving interest from Ole Miss, LSU, Ohio State and Vanderbilt. He’s a bit of an under the radar prospect thanks to missing time in 2013 due to transfer rules. He also suffered an ACL injury which required surgery in February – but he’s been turning heads since returning to the field this season.

He primarily plays running back but is also an adept receiver out of the backfield. Perry accounted for over 120 yards of offense on just 12 touches in his first game this season. Speed and explosiveness are his strengths and he’s among the fastest players in the 2015 class. He’s a nice find for Butch Jones and Co. and could see a rankings bump in the future. One of Tennessee’s top remaining targets, Kyle Phillips, is one of his teammates – keep an eye on his recruitment in the coming weeks.

A two-sport athlete, Perry also hopes to play baseball at Tennessee. You can view his full RTI profile, which includes video highlights, here.

Here’s our scouting report on Perry:

In limited film, Perry shows incredible shiftiness and great acceleration. Primarily used as a running back, he could also project as a slot receiver, cornerback or possibly a return specialist. Could be described as a larger and faster Devrin Young in some aspects. He had a solid 2014 season through the time of his commitment and Tennessee obviously feels comfortable with his athleticism and versatility. He’ll be recruiting his teammate, Vol defensive line target Kyle Phillips, hard in the coming months.