A second season of sorts starts for the Vols on Saturday. Tennessee took some lumps in the middle of the season, but the Vols still have a chance to make a bowl game. The Vols are looking for at least three wins in their final four games, and though it won’t be easy, at least there aren’t any ranked opponents standing in their way. The emergence of Joshua Dobbs at quarterback also gives the Vols some early-season-type optimism going forward. With Justin Worley (shoulder) out, Dobbs got his chance last week and made the most of it against Alabama, putting 20 points on the board and leading a big UT comeback that ultimately fell short to Alabama, but did seem to spark the team and the fans. Dobbs, a more mobile quarterback, is expected to get the start in Columbia against a South Carolina defense that has struggled this year. But the Gamecocks have some offensive firepower themselves. It should be a close one this week.

Who has the edge?

South Carolina has been shelled through the air several times this year and the Gamecocks currently sit at 11th in the SEC in pass defense, giving up nearly 230 yards a game. This is one area that is somewhat of an unknown for Tennessee, assuming Josh Dobbs is at quarterbacks. Dobbs made several impressive throws against Alabama, but missed some key ones as well. Both Butch Jones and offensive coordinator Mike Bajakian said this week that they need Dobbs to make the routine plays regularly. Tennessee’s offense should put Dobbs in position to do that. The receivers should have a physical advantage on SC’s defensive backs and a suddenly rejuvenated offensive line will have a chance to buy Dobbs time against a defensive line that is last in the SEC in sacks. If all that clicks, the Vols could have a nice night through the air, but they’ll have to prove they can do it consistently. Edge: Even

While SC’s defense has been suspect against the pass, it’s been downright atrocious against the run, checking in dead last in the league in rushing defense. Tennessee’s run game, which had been dormant the past few weeks, got a huge spark with Dobbs in the game last week. Dobbs had 75 yards on the ground himself and opened up running space for Jalen Hurd and Marlin Lane as well. The offensive line also had its best day of the year in this area. Tennessee needs to match, if not exceed, its total of 181 rushing yards that it piled up against Alabama. Against a defense that will be without leading tackler LB Skai Moore, expect the Vols to do just that. Look for a heavy mix of Dobbs, Lane and Hurd, who also will likely take snaps out of the Thundering Hurd (wildcat) formation. Edge: Tennessee 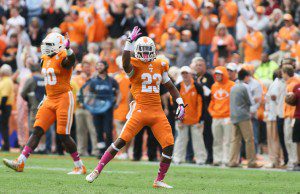 He’s not getting a ton of national accolades, but quarterback Dylan Thompson is putting up big numbers (175-of-288, 2,241 yards, 20 TDs, 9 INTs). He’s on pace to become SC’s all-time, single-season record holder for passing yards. After Amari Cooper did massive damage to UT’s secondary last week, the Vols will be in for a different challenge this week. South Carolina has three receivers with 300 or more receiving yards on the season, so the Vols won’t be able to lock in on one target. It wouldn’t be surprising to see Cam Sutton have a nice bounce-back performance after last week, but it will be interesting to see if the likes of Justin Coleman, Michael Williams and Emmanuel Moseley can stick with this deep group of WRs. Running back Mike Davis and tight end Jerrell Adams are also nice targets. UT’s defense will have its hands full. Edge: South Carolina

Davis is one of the top backs in the SEC and he’ll play on Sundays in the near future. He averages a touchdown per game and is close to averaging 100 yards per contest as well. The Vols must limit him. Brandon Wilds is a very solid No. 2 back who can come in and spell Davis. The versatile Pharoh Cooper, who is SC’s leading receiver, can also line up in the wildcat and take a direct snap. Statistically, this is a fairly even matchup. The Gamecocks average 177 yards per game rushing and the Vols give up an average of 162. Getting off the blocks of South Carolina’s big, physical offensive line will be key for Tennessee’s defense front. Edge: Even

South Carolina’s Elliott Fry has been one of the best kickers in the nation this season, connecting on 12-of-13 field goals. He’s perfect on the year inside 50. Both teams have talented returners with game-breaking potential. The Gamecocks have a slight edge in punting average. Nothing substantial for either side, but if the game came down to a game-winning field goal, SC would likely have the better shot. Edge: Slightly to South Carolina

What South Carolina is thinking

This season hasn’t gone the way we’ve planned, but we still have a chance to do some very good things down the stretch. An 8-4 season with wins over Clemson, Georgia, Florida and Tennessee still sounds pretty good. That’s our motivation, even if the East crown is out of reach now. Plus, we owe Tennessee some revenge. The Vols got us last year, but they’re not going to be ready for our crazy atmosphere on Saturday night. We can move the football on that defense after seeing what Alabama did. Defensively, we’re ready for Dobbs. We’ll have a gameplan to limit his effectiveness. If we can do that, we’ll win this one by a score or two and prove that the Ol’ Ball Coach still owns Tennessee.

What Tennessee is thinking

Time for a changing of the guard. South Carolina has been above us in the SEC East for several years now, but we got them last year and we’re going to turn that into a winning streak as we work our way back up to prominence. It’s a four-game season for us with basically double elimination. We have to get at least three and we don’t want to put ourselves behind the eight ball by starting off with a loss. Our offense finally found some confidence late against Alabama and Dobbs simply gives us some dimensions we can’t have with Worley. We need him to take care of the football and make the routine plays. If he does that, we grab a turnover or two and play the way we know we can, we’ll get out of Columbia with a W.

What RTI is thinking

Like the other three games remaining on the schedule, Tennessee has a legitimate shot in this one. If the defense plays up to its potential and the Vols continue to show the fire they did with Dobbs at quarterback last week, they’ll have a decent shot to pull off the road upset. Can they take that step though? Beating South Carolina last year was big for this program. Now they have a chance to win their first true road game against a non-Vandy or Kentucky foe since 2007. It’s tough to say that they certainly will, but it wouldn’t surprise us if they do.