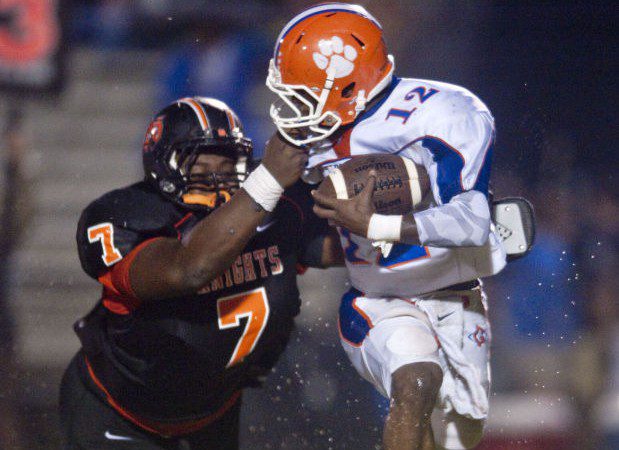 We’ve rounded up some commitment stats and notes. As generally is the case with high school statistics, consider them unofficial since they were gathered from various local sources.

QB Quinten Dormady: Dormady did a little bit of everything to get Boerne past Canyon Lake in a 42-35 shootout. He threw for a couple touchdowns, converted a 2-point conversion on the ground and then had the game-winning 45-yard touchdown run with under a minute remaining. (via MaxPreps)

QB Jauan Jennings: With Butch Jones in attendance, Jennings and his Blackman squad took care of business in the first round of the playoffs, knocking off Cane Ridge 49-14. Jennings had an easy night, completing 6-of-15 passes for 84 yards and three touchdowns while adding 31 yards on the ground before getting the entire second half off. “He knows what I can do on the field and he knows me pretty well off the field,” Jennings told the Daily News Journal. “I’m pretty sure he wasn’t too surprised, but it felt great to be able to show what talent we have here at Blackman.”

RB Rocky Reid: Another huge night for Rocky Reid, who led his Concord team to a 60-12 victory to wrap up the regular season. Via @OrioleWay on Twitter, Reid’s final stat line included 215 yards and four touchdowns as he continues to build on his county record for career rushing yards.

RB Alvin Kamara: Kamara missed last week’s game with an injury and is questionable for Hutchinson’s matchup with Independence this Saturday.

WR Preston Williams: Williams appears to have sat out last night’s game after sustaining a leg injury the prior week.

ATH Joc Bruce: Bruce had a 4-yard touchdown run in the fourth quarter to help South-Doyle avoid a first-round scare against Gibbs in the first round of the playoffs. Down 14-7 at the half, the Cherokees responded with 25 points to pull away for the victory. (via KNS)

ATH Vincent Perry: With Tommy Thigpen in attendance to watch both Perry and Kyle Phillips, Hillsboro blew Kenwood out 55-12. Perry had 13 carries for 93 yards and a TD as well as some plays receiving and throwing (via The Tennessean.) He also got some praise for his defense:

Vincent Perry just layed a hit in perfect timing on a receiver that I feared would knock out KW. It was a SEC/ NFL hit that left was loud.

DE Dylan Jackson: Maryville made easy work of Walker Valley in a 48-0 victory to start its march through the playoffs.

#Vol commit Dylan Jackson rips into the backfield and records the TFL. Brings up 4th down.

DT Quay Picou & LB Austin Smith: Buford’s defense continues to be smothering as it put up another shutout, this time a 56-0 win over Stephens County.

DT Shy Tuttle: How athletic is the 300-pound defensive tackle? North Davidson has lined him up in the backfield on multiple occasions this season, and it paid off Saturday as the big man rumbled in for a 3-yard touchdown. He also had a TFL and a forced fumble on the first play of the game (via @RivalsFriedman).

QB Austin Kendall: Kendall completed 21-of-36 passes for 223 yards, three touchdowns and no interceptions in Cuthbertson’s 32-29 win over Piedmont. Kendall also added 16 carries for 47 yards and two more touchdowns, for a total of five.