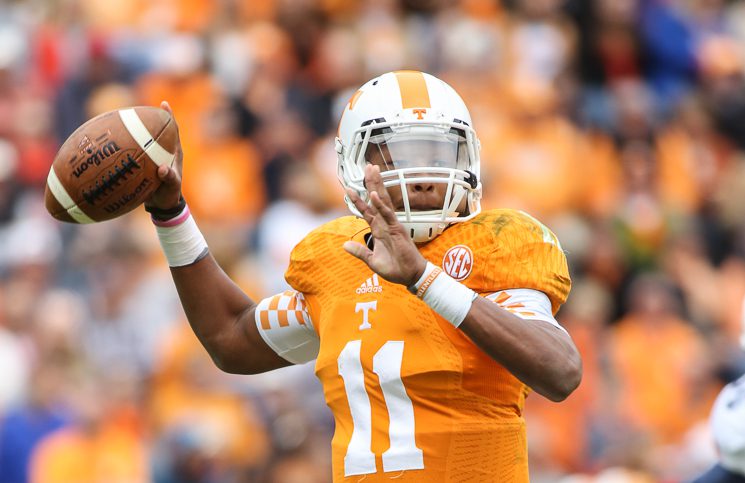 There’s no denying that Tennessee’s offense has been a drastically different unit since Joshua Dobbs took the reins. With Dobbs, the Vols are dynamic. They’re balanced. They’re tough to defend. And they’re scoring points in bunches.

Tennessee is averaging 38.33 points per game since Dobbs took over. The Vols posted their biggest win over Kentucky in 14 years on Saturday. They’ve posted back-to-back 500 yard games against SEC opponents for the first time since 2000. Tennessee scored 20 points on Alabama, something UT hadn’t done against the Tide (in regulation) since 2003. The Vols recorded 344 rushing yards against South Carolina – their most against an SEC foe since 1994. Dobbs’ 166 yards rushing against South Carolina set a school record for a quarterback.

Dobbs led the Vols to the third-largest 4th quarter comeback in program history against the Gamecocks. In fact, Tennessee had never trailed by such a margin so late in a game and emerged victorious – by that measure, this was Tennessee’s most dramatic comeback win in history.

The list goes on and on and on. And people around the nation have noticed.

Josh Dobbs with these Tennessee WRs is scary. SEC East favorite in 2015? Perhaps…

Heisman 2015? Any list that doesn't have josh Dobbs on it it isn't a smart list @Vol_Football will be dangerous in 2015 future bright

Is Dobbs for Heisman in 2015 realistic? An analysis of his performance thus far paints an optimistic picture.

Dobbs is averaging 263.3 yards passing, 96.3 yards and 3.66 touchdowns per game this season. How do those numbers stack up against the competition? He ranks first in the SEC with 360 yards of total offense per game – 22 yards ahead of Dak Prescott. His 88.6 QBR ranks second (!) nationally behind only Marcus Mariota. Perhaps more impressive: Dobbs missed three drives against Alabama and an entire quarter against Kentucky. He’s put up those impressive numbers despite playing just one full game.

How does his production compare to other Heisman trophy winners/candidates from the SEC? Very, very well.

Simply put: Dobbs is performing at a Heisman level right now. That’s how good he’s been for Tennessee. He’s played the 1st, 10th and 13th ranked defenses in the SEC so far – that averages out to 8th (or about average in a 14 team league). He faces a tough test this weekend when Missouri comes to town, but it’s tough not to ponder what 2015 holds for Joshua Dobbs and the Vol offense.

If he closes out the season with performances like his first three this year (a tall, but achievable, task), it’s not ridiculous to think he’ll enter 2015 on some Heisman watch lists.

In fact, if the numbers are any indication, it’d be ridiculous to leave him off them.