Q: With Kyle arriving on campus this week, Tennessee fans want to know what they’re getting. What stands out about Kyle from your time coaching him?

A: First of all you look at his size – the kid is college ready size-wise right now. He’s 6-3 1/4, 250 pounds and the kid just goes hard constantly. His motor is always on go. The kid never takes a play off. He’s physical at the point of attack and I’m telling you, I think if that kid stays healthy, he’s going to be a first-round pick. The things that he can do at 6-3, 250 pounds, his first step, I mean he’s a 4.6 40 (yard dash) kid and he’s not even weight-room strong yet. He’s just a dominator on our level and he showed you at the Army All-American Game that he’s a dominator against any level – against the top players in the nation, he was the best player on the field on the defensive side of the ball. Tennessee got a game changer. I think he needs to get a little stronger in the weight room, but when that happens, the sky is the limit for him.

Q: What’s the most impressive thing you saw him do on the field?

A: Just the plays he makes. The most impressive is one thing that he did, and it was actually this year, we played in the state semifinals and we were down at Memphis Ridgeway. The ball was on the right hash on their sideline and he’s playing the weakside defensive end spot, so he’s closest to their sideline on that hash and they ran speed option to the wide side of the field, and their running back was a good running back – he had 2,000 yards rushing – Kyle made the play, and it’s tough to visualize, on the opposite side of the field against speed option for a 2-yard gain and I’ve never seen that before where a kid is on the backside, he makes a play against speed option on the wide side of the field. That just signifies the type of ability and hustle that kid had. He’s one of a kind. He’s a great get.

Q: You mentioned that he’s not weight room strong yet, is that the biggest thing he needs to work on in college?

A: It’s technique and just overall strength. The problem we had with him is that we couldn’t block him (in practice), and nobody really could on our level, so he didn’t practice a lot of defense. So when it comes to pass-rush moves and technique, he’s extremely raw. And with the weight room, he was a basketball player up until his senior year, he had that labrum surgery, so he never really had a full offseason in the weight room. He was always strengthening the shoulder where he had the labrum tear and everything like that. But yeah, his two weaknesses are probably weight-room strength in terms of putting up numbers in the weight room and just overall technique, but all those things are very, very fixable.

Q: Fair or not, UT fans saw what Derek Barnett did as a freshman and might have big expectations for Kyle as well next year. Is he a guy that can make a big impact early, or will he need some time to develop?

A: To be honest with you, I think it all depends on his shoulder. It kind of popped out on us twice this year and he played through it. Barnett was a little stronger, but I think Kyle is a lot more athletic. Kyle is going to end up being 265-270 pounds and the kid has no body fat. He’s long, he’s lean, he’s got a 6’11 wingspan. He’s got length, his first step is amazing for a kid his size, and like I’ve said all year, if there’s a better overall player in this area or any area to be honest, I can’t fathom it. Like his ranking, I think he’s No. 109 in the nation and No. 150 in another, and I’ve said since that happened, if there are 149 or 108 players better than Kyle Phillips, this is a heck of a class, because this kid has size, speed, athletic ability, he’s strong at the point of attack, but his character – this kid has all the intangibles you want in a kid. I’m only 29, I’ve coached seven years and I’ll hopefully coach the rest of my career Lord willing, and never have a player like Kyle Phillips.

We also asked about Tennessee ATH commitment Vincent Perry, who played on both sides of the ball for Hillsboro

Q: How did you guys use Vincent and what stands out about him?

A: Vincent played majority offense. He did play some safety for me. He’s a better baseball player they say than football player, which is hard 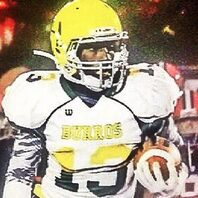 to imagine. Vincent is probably my favorite player and I’ve always said at the same time that UT got an absolute steal with that kid. What we did – and the reason Vincent didn’t have better numbers – and the kid still had 1700 yards for the year, but early on, coming off the ACL we kind of limited him kind of like a pitch count in baseball, we limited to about 10 touches per game because we knew when we got to the playoff, we were going to use him a lot, so that’s why he didn’t have some of the gaudy numbers. But Vincent played some nickelback and free safety and made a lot of plays towards the end of the year. Vincent Perry is going to be an extremely, extremely good player for Tennessee and I’m 100% confident in saying that and Tennessee got probably the biggest steal of their class with him. That kid is just a ball player.

Q: Any idea how Vincent will be used at UT?

A: I think he’s going to be a punt returner/kick returner and slot wide receiver which is what I envision him as. He’s got great hands, he’s a home-run hitter. Our guidance counselor used to coach at Miami Northwestern High School and he’s told everybody that Vincent Perry is the best athlete he’s seen since he left Florida and he reminds him of Percy Harvin – not as physically strong as Percy was coming out of high school, but he said he reminds him of Percy Harvin because he catches the ball so fluid and you never get a good shot on him. But the kid is electric. Every time we were on offense, I would stop talking and want to watch Vincent get the ball every time it was called. Every time he touched it, we thought he was taking it to the house.