Butch Jones is known for revving the recruiting momentum up late in the summer before fall camp gets underway. He continued that trend on Saturday afternoon, landing consensus four-star linebacker Daniel Bituli of Nashville Christian School, who is ranked as the state of Tennessee’s best player, according to rankings from both 247Sports and ESPN.com.

Bituli, who has long had the Vols at or near the top of his list, picked the Vols after visiting Knoxville on Friday for a camp.

I am officially committing to the University of Tennessee #Vfl @TheNextVol

The 6-foot-3, 231-pound Bituli chose the Vols over at least a dozen other offers, including Auburn, Florida, Ole Miss, South Carolina, LSU, Ohio State, Oklahoma and others. Bituli is the second linebacker to commit to the Vols thus far for the 2016 class, joining three-star outside linebacker Tim Hart from Memphis University School. 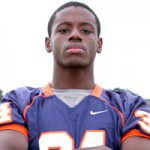 Status
Bituli is a consensus top-10 player in the state for 2016 and is currently sitting at No. 1 on both 247Sports.com and ESPN.com’s state rankings for Tennessee. The Vols were the first SEC school to offer Bituli, doing so in March of 2014, and since then the floodgates have opened for the talented linebacker from the Midstate. Bituli claimed that Ole Miss and Tennessee were the two schools that stood out most to him early in on in his recruitment, but he committed to the Vols on July 18 after visiting campus.

Explosive, powerful, fast, nasty…the list goes on and on when describing Daniel Bituli’s game. He is a vicious tackler who knows how to make the most of every hit, punishing ball-carriers and quarterbacks with regularity when given the opportunity. As a junior, Bituli was at his best when he was used as a blitzer and simply allowed to hunt the football and make high-impact plays. He will need to shore up some technique issues when he gets to the next level in order to reach his full potential, but whatever school signs him is getting a player will all of the tools to be a disruptive player at the collegiate level. His speed, strength and tenacious approach when pursuing the football make him one of the most coveted players in the 2016 class.

Bituli plays primarily outside linebacker in his junior film. He has the skillset to play there, but also could have the frame and the instincts to be an inside ‘backer at the collegiate level as well. The coaches will figure that out when he gets on campus, but he certainly has all the tools to help the Vols somewhere on the second level of the defense in the future.