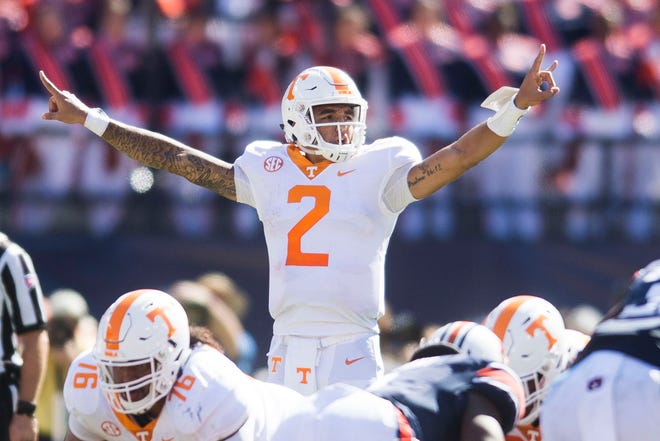 Bettors and oddsmakers are not expecting Tennessee to pull off an upset like it did last time it played at Auburn.

The Westgate SuperBook opened the Vols as 10-point underdogs and it has shifted to an 11-point spread during the week. Tennessee sprung a 30-24 upset at Jordan-Hare Stadium as a 15.5-point underdog in 2018.

Early betting action in the market has been on Auburn, which is why the SuperBook moved the line from 10 to 11. They have also taken some bets on the Auburn moneyline at -420, which means bettors have to risk $420 to win $100.

“We have some small liability on the spread and the moneyline,” SuperBook risk manager Edgar Federico said. “Liability on both straight bets and parlays.”

The Vegas-based sportsbook has also taken some action on the ‘under.’ They opened at 49.5, but it has moved to 50.5 across the market.

All of the betting action on the game has been from recreational bettors thus far. Auburn is a popular play for bettors trying to hit multi-leg parlays.

“It’s small, nothing that we are concerned with. It’s all these guys that come in and throw in a six or seven-teamer (parlay) for $500 and they go with the locks…just kind of that strategy,” Federico said. “We will take that bet all day. No sharp action on Tennessee or Auburn.”

Tennessee has been miserable against-the-spread lately. The Vols have failed to cover the spread in their last four games and none of them have been particularly close. They were going to be double-digit underdogs against Texas A&M if the game had been played last week.

Auburn has been playing much better football, covering the spread in its last two games. The Tigers have not played since their 48-11 win against LSU as 1-point favorites on Oct. 31.

Bettors have been making money betting on the ‘under’ in Tennessee games. The Vols have gone under the total in their last three games and in nine of their last 11 contests overall.

Auburn has also been playing in low-scoring affairs. The Tigers have gone under in five of their last six games, with the exception being the blowout win against LSU.

Tennessee has won just four of its last 10 games against Auburn, covering the spread in five of them. The Tigers have won and covered in two of the last three meetings.