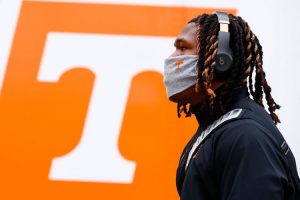 The Tennessee Football department has seen a massive amount of change since the end of the 2020 season, and a large portion of the departures for Tennessee has come through the transfer portal. Since October, the Tennessee football team has had 25 scholarship players transfer out of the program, which is the most among all Power 5 teams according to Pick Six Previews on Twitter.

The Vols have lost a number of important players ranging from statistical team leaders and starters to players that just provided quality depth.

On the offensive side of the ball, Tennessee saw two quarterbacks leave the program in Jarrett Guarantano and J.T. Shrout. Not to mention, Oklahoma picked up Eric Gray, who led Tennessee in rushing yards and was second on the team in receptions. Ty Chandler, the second-leading rusher on the team, also transferred out of Tennessee.

Marquee defensive starters such as Henry To’o To’o, Quavaris Crouch, and Darel Middleton are all left to be replaced as that side of the ball was especially picked dry as well.

Ultimately there was no shortage of departures from the team. Even names that have become forgotten about over the months like Brandon Johnson, Deandre Johnson, Wanya Morris, and Key Lawrence are going to take time to fully replace.

And while the overhaul certainly was rooted in the administration change, the newly implemented transfer rules did not help Tennessee either.

Under the new legislation that was passed in early 2021, collegiate athletes were granted the ability to transfer schools one time during their careers without penalty. This also eventually included the ability to freely move within conferences without consequence.

While 25 is a high number of players to have left the program, Tennessee also did bring in plenty of talented players through the transfer portal. Coach Josh Heupel brought in eight transfer players since he arrived on campus, multiple of which were former Power 5 starters.

Juwan Mitchell, a standout linebacker from Texas, and Brandon Turnage, a cornerback formerly with Alabama, are two of the key incoming defensive names to keep in mind.

Only five teams have had 20 or more players transfer out, with three of those coming from the SEC. Tennessee sits at the top with 25 while Mississippi State and Missouri both have had 20 players hit the portal. Michigan State and Kansas round out the top five with 22 each.

Out of the Top 12 teams, nine of those were all within a year of a coaching change. These teams included everyone in the top five, plus Auburn, Vanderbilt, Louisville, and West Virginia. Lastly, Michigan, TCU, and North Carolina were the three programs that round out the list that did not undergo a coaching change.