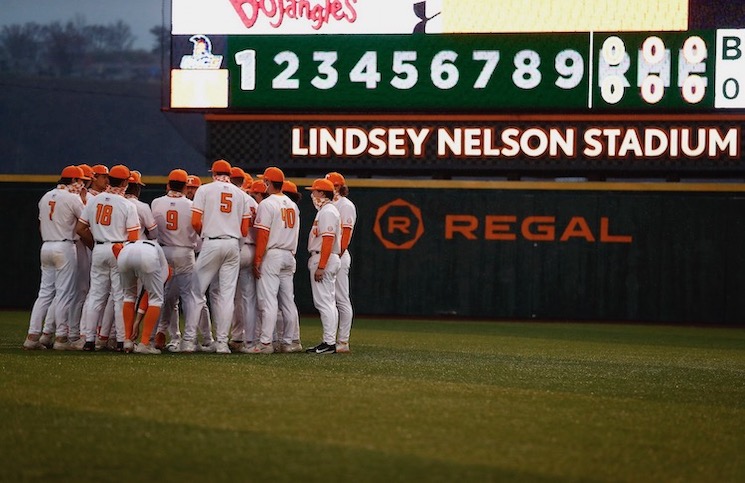 While no current Vols are projected to go in the first round, it’s bound to be a busy three days for Tennessee baseball.

Here’s everything you need to know about the current and future Vols with a chance to be drafted in the 2021 MLB Draft.

Tony Vitello’s first full signing class at Tennessee helped change the program’s trajectory and those juniors are now draft eligible and likely have played their last games in a Tennessee uniform.

Second baseman Max Ferguson is likely to be the highest drafted current Vol in this week’s draft. The Florida native is an elite defender in the middle infield and a strong athlete, stealing 28 bases in 114 career games.

The lanky left handed hitter struggled mightily at the plate to open the season before breaking out of his slump to hit .253. Ferguson showed an added pop to his bat as a junior, hitting 12 home runs and driving in 48 runs.

Catcher Connor Pavolony was a major part of Vitello’s rebuild, starting behind the plate for three years. The junior hit .260 with seven home runs in 49 games while dealing with a plethora of minor injuries and a fractured hand that sidelined him in SEC play.

Tennessee native Jake Rucker was a three year starter for the Vols playing second base as a freshman before replacing Andre Lipcius at the hot corner the last two seasons.

Rucker was one of Tennessee’s most consistent bats, hitting .330, nine home runs and 55 RBIs as a junior. The Greenbrier, Tennessee native is a likely day two draft pick.

Speaking of consistent bats, Liam Spence was as solid as anyone at the plate for Tennessee in a historic 2021 season. The Central Arizona transfer was off to a strong start in 2020 before COVID-19 ended the season.

Spence picked up where he left off last season, hitting .346/.462/.462 from the leadoff spot. The reliable shortstop won’t be easily forgotten and is likely a day two draft pick.

Rounding out the list of infielder’s Tennessee is likely to lose to professional baseball is first baseman Luc Lipcius. Unlike the rest of this list, Lipcius is not a lock to be drafted. While the senior could return for a sixth season due to COVID-19 eligibility relief, Luc’s twin brother Andre left Tennessee two years ago and it seems likely Lipcius is ready to open a new chapter of his life.

On the mound, Chad Dallas has flown up draft boards in the last six weeks of the season as the hard nosed right hander continued to impress with his strike throwing.

Tennessee fans haven’t gotten to see Jackson Leath’s full potential as the former junior college standout lost his junior season to COVID-19 and his senior season to a hamstring injury in February.

Still, Leath is as talented as any Tennessee pitcher and will likely hear his name called on Monday. If Leath were to drop, the senior could take advantage of his extra year of eligibility to return to Tennessee.

Georgia native and Perfect Game’s top rated high school prospect Brady House is a lock to go in the first round and likely will be a top 10 draft pick.

House was a two way star in high school, repping an impressive mid 90s fastball on the mound but the 6-foot-3, 210 pound prospects future is playing shortstop.

The highest rated signee of Tony Vitello’s tenure in Knoxville can do it all but it would be a shock if he ever made it to campus.

Instate power pitcher Chase Burns ranks as Perfect Game’s No. 17 prospect in the country. The Beech High School prospect bolsters an upper 90s fastball and a sharp slider that would make him an instant impact player if he makes it to campus.

The state of Tennessee’s top rated prospect isn’t projected to go in the first round but he shouldn’t have to wait long to hear his name called on Monday.

Burns isn’t near the lock that House is to turn professionally straight out of high school but Tennessee will have to have a lot go right for Burns to make it to Knoxville in the fall.

Current Vols on the bubble

The list of Tennessee players to watch in the MLB Draft that still have a solid chance of returning to school is short, but full of important veteran arms.

Junior Camden Sewell missed most of the 2020 season with an injury and saw limited opportunities in the first half of the 2021 season. Still, Sewell became one of Tennessee’s most reliable bullpen arms the second half of the season.

The Cleveland, Tennessee native posted a 0.74 ERA in 24 innings in the second half of SEC play and postseason play. The strong close to the season put Sewell firmly on team’s radar and made him a candidate to leave Knoxville.

Sewell will be one of the most intriguing cases to follow over the next few days. One thing in Tennessee’s favor is that Sewell could vastly improve his draft stock with a strong senior season as a starting pitcher.

Sean Hunley is another senior who could return for one more season due to COVID. The Mt. Juliet, Tennessee native has been Vitello and Frank Anderson’s go-to arm out of the bullpen the last three seasons and the Vols would love to have him back for one more year.

The tall right hander doesn’t have overpowering stuff and is likely a day three draft pick.

Redmond Walsh is another senior who could return for another season of eligibility and is unlikely to be drafted . The Alcoa native will be one to watch in the days following the draft.

Vol commits on the bubble

This crowded list full of names most of Vol nation does not yet know will have a massive impact on the 2022 Tennessee baseball team.

If he makes it to campus, Spikes will have a great chance to fill Spence’s shoes, but the Parkview High School standout could just as easily begin his professional career instead of making it to Knoxville. Spikes is expected to be a day two draft pick.

Dayton Dooney is one of the most highly touted incoming prospects due to the transfer’s outstanding freshman season at Arizona where he earned Freshman All American honors, hitting .323 with 10 home runs and 53 RBIs.

The second baseman transferred to Central Arizona after the 2020 season, where he hit .376 with nine home runs. Like Spikes, the switch hitter will have a great chance to play early in Knoxville.

Temple College transfer Seth Stephenson is another junior college transfer that could factor in the middle of Tennessee’s infield next season. Stephenson’s draft stock rose exponentially this season where he hit .383 with 13 doubles, nine home runs and 47 RBIs.

Speed may be Stephenson’s best quality as the sophomore hit nine triples and stole 31 bases in 2021. The Buda, Texas native projects to be an early day two draft pick.

Christian Moore is a high school middle infielder that will compete for early playing time if he makes it to campus. The Brooklyn, New York native ranks as the nation’s 91st best player and could be a day two or day three draft pick.

Tennessee doesn’t need to have all five of its major middle infielder prospects to enroll in classes this fall, but having a few make it to Knoxville will be instrumental for the 2022 Vols.