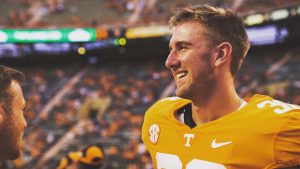 Tennessee wide receiver Grant Frerking is not only an athlete on the gridiron, but he is also an established and successful business owner. One that is none too familiar with the snooze button, either.

“I don’t get too much sleep,” Frerking said on the RTI Podcast. “That’s for starters.”

Grant Frerking recently joined the RTI Podcast to talk about NIL, playing for Tennessee while operating a business, and more.

Frerking is a redshirt senior with the Tennessee football program. He first joined the team in 2017 during his freshman year.

As if that wasn’t impressive enough, Frerking is also the CEO of a multimillion-dollar company, Metro Straw, based out of Atlanta. Frerking has been operating Metro Straw since he founded the company at the age of 15.

And now, even in his fifth year with the Tennessee football team, he is still continuing to thrive as a CEO as well. Although, his day-to-day life can get a little complex sometimes. As in, get-out-of-practice-and-have-50-missed-calls type of complex.

His day gets flip-flopped back and forth between football and business. Quite often, actually.

“My day gets started between five and six [in the morning],” Frerking said. “Then I’m balancing staff meetings, crews are getting rolled out for the day, fires are popping up left and right. So I’m dealing with all that other stuff while I’m drinking my coffee.”

Then it’s over to the football field with his team. Mind you, the sun hasn’t even risen at this point in the day yet.

“Then I show up and we either have a workout, you have breakfast, you have a hydration test, you have something,” Frerking said on the RTI Podcast.

However, right when he is out of practice, Frerking has to jump straight back into CEO mode.

“Throughout the day I always have my work phone, my personal phone, and usually my iPad with me,” Frerking said. “So right when I’m out [of a meeting] I have to hit two or three e-mails, a couple texts, take a call, and listen to a voicemail before I go out to practice.”

For Frerking, playing for Tennessee while he operates his own business is just something normal. And having to wake up early, while going to sleep late, is just something that comes with the territory of following your passion.

But one thing is for sure. Whether it’s playing football for Tennessee, building and sustaining a business, or anything else in between, Grant Frerking may just be the hardest working man in Knoxville.

Catch the full episode of the RTI Podcast featuring Tennessee wide receiver Grant Frerking right here. Listen to Frerking talk more about his daily routine, operating NIL as a player and a teammate, and much more.