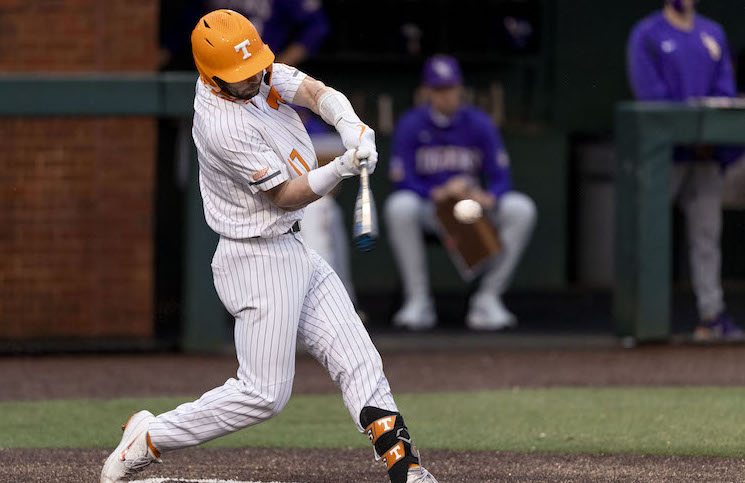 Tennessee catcher Connor Pavolony helped set the tone in SEC play for the Vols’ historic 2021 season. The opening weekend against Georgia, Pavolony showed his toughness, playing with a few minor injuries and tagging up from third for a go-ahead run in the first of five series rubber matches Tennessee would win.

That turned out to be only a glimpse of the backstop’s toughness.

All Vol fans remember Evan Russell’s grand slam to give Tennessee an eighth inning lead in game two of the Vanderbilt series. Most won’t remember the at-bat before that loaded the bases.

Pavolony took a 95 mph fastball off his right hand, one that at the time looked like it might end his season

“We didn’t take my batting glove off on the field,” Pavolony told Rocky Top Insider Monday. “When we got back in the training room the batting glove would barely come off because my hand was so swollen and when I looked at it I was like, yeah it’s broken. I didn’t even want to go get an X-ray but we ended up getting an X-ray during the game and it wasn’t broken on the X-ray so I was like ‘okay, cool. It might just be a really bad hand contusion.”

Believing he was in the clear from any bone damage, Pavolony returned to the lineup the next weekend in College Station, hitting two home runs in a series win over Texas A&M.

While preparing for a midweek game against Lipscomb, the pain in Pavolony’s right hand became worse leading him to get an MRI.

“The Tuesday before that midweek I couldn’t even pick my bat up,” Pavolony said. “I was like this is a problem. We went and got an MRI on it and there were two fractures, one in my fifth metacarpal and one on my fourth— my pinky finger and my ring finger— at that point it’s like what’s the timetable? That was my first question, what is the timetable?  If my season is going to be over I’d rather know.”

The timeline for Pavolony to return from two fractures in his throwing hand was three to four weeks. The junior playing in College Station pushed it back another week.

On the surface, a return before postseason play would be a positive for Tennessee but Pavolony’s grit and desire to play pushed him back in the lineup a full week to two weeks earlier.

“Arkansas was the original week had I not played at A&M,” Pavolony said. “Since I had played it was the week after Arkansas (South Carolina). Tennessee has incredible resources so we had a bone stem machine I would do everyday and then working with (Associate Director of Sports Medicine – Baseball – Jeff) Woody every day it wasn’t like we were trying to rush it but at the same time we weren’t trying to take it easy. It wasn’t like it was February when I did it. Coming back a week early was something— when I brought it up to them they were kind of like no at first, it was a hard no at first. Then I was like just let me hit, let me practice. Let me do all of this stuff so I can show you I can do it.”

“If you ask me if I was 100% when I played against Arkansas I would say no and I think the doctors would say no too. But at the end of the day, losing on Friday night and watching and knowing there was nothing I could do about it hurt more than anything. I was playing on Saturday regardless. It didn’t matter how I felt when I woke up. It didn’t matter how it felt before the game. I was playing.”

In his first game back from injury, Pavolony helped set up another one of Tennessee’s memorable come from behind wins in 2021.

The Woodstock, Georgia native led off the bottom of the ninth inning with a single, helping set the stage for Max Ferguson’s walk-off winner against No. 1 Arkansas.

From there on, Tennessee’s starting catcher began to hit his groove. While as reliable as ever behind the plate, Pavolony had struggled at the plate before he broke his hand.

After returning from injury, Pavolony was fantastic at the plate.

Entering the Arkansas series, Pavolony was hitting just .219 with four home runs. The junior ended the season on a tear, clawing his batting average up to as high as .271 before ending the season hitting .260 with seven homers.

“I would never put my team in a position where I would play hurt enough to hinder their performance,” Pavolony said. “I got weekly X-rays on it and it was getting better. That’s all I was worried about. I wasn’t worried about it healing completely. I just wanted to make sure it was getting better and better. …  At the end of the day we minimized the risk as much as we could and that was good enough for me. If God wanted me to break my hand even more, I would have got hit again, but at the end of the day I didn’t and I ended up playing pretty well with a broken hand and I’ll be able to hang my hat on that. It was fun and I wouldn’t change it.”

Pavolony’s reputation as a strong defensive catcher and his hitting to end the season led to the Baltimore Orioles selecting the three-year starter in the seventh round of the MLB Draft. One of the cornerstones in Tony Vitello’s resurrection of the Tennessee baseball program, Pavolony signed with Baltimore for $325,000. Well over the $237,000 estimated pick value.