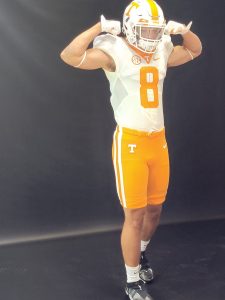 Kalib Perry, a linebacker in the class of 2022, has officially announced his commitment to head coach Josh Heupel and the University of Tennessee. Perry made his announcement Saturday afternoon during a ceremony that was held at Great Crossing high school.

Perry, a three-star recruit according to both 247 and Rivals, announced his commitment to Tennessee over Cincinnati, Kentucky, and Purdue.

The Georgetown, KY native stands at 6-foot-3 and weighs 215-pounds. Although he is listed as a linebacker, Perry has been athletic enough in high school to cover a range of positions. According to his Twitter, Perry played quarterback, wide receiver, and free safety, as well. And, he is a multi-sport athlete. Perry is also on the basketball team and track team at Greater Crossing high school.

The Tennessee Volunteers‘ newest commit, Kalib Perry, took three visits during the month of June. He first took a trip to Purdue on June 4. Then, he followed that with a visit to Cincinnati on June 18. And although it was not an official visit, Perry did attend a Kentucky camp on June 23, as well. And finally, Perry took his final trip to see Heupel and Tennessee on June 25.

“Thank you to [Tennessee Football] and all of the coaches for showing me around UT’s campus and facilities,” Perry posted to Twitter after his visit to Knoxville.

In total, Perry received 13 Division-1 scholarship offers. The most notable of which were Kentucky, Cincinnati, Purdue, West Virginia, and Tennessee.

Perry is the 12th addition to coach Heupel’s 2022 recruiting class at Tennessee. He also joined Elijah Herring as the second linebacker in the class, as well.

The new Volunteer is ranked as the eighth-best player from the state of Kentucky and the 80th linebacker in the class overall.

Perry’s versatility on the football field in high school has allowed him to showcase his athletic range, but also expand his football IQ. Perry could wind up being a player that is asked to do a number of things on the field and in practice. Especially to take advantage of his size and his versatile experience. Not to mention, his background in track and basketball will only continue to help him be a more well-rounded athlete.

Kalib Perry, a three-star LB and Tennessee football’s 12th recruit to the 2022 class, announced his commitment to the Volunteers from his hometown high school on Saturday.

You can check out Perry’s high school tape here.