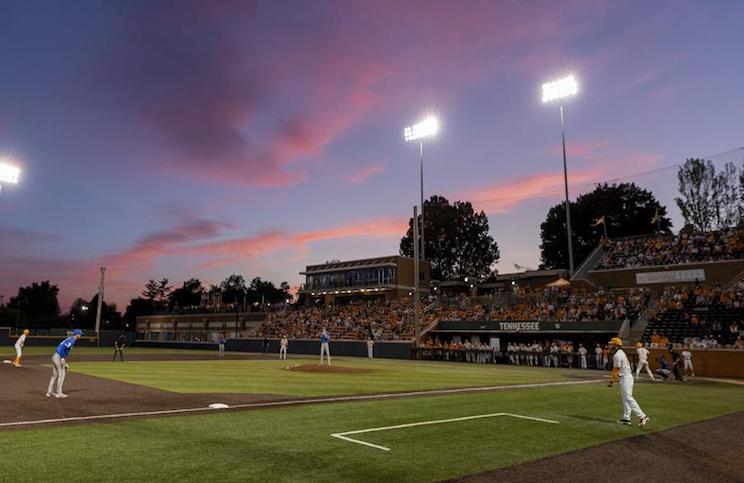 KNOXVILLE, TN – April 30, 2021 – Sunset during the game between the Kentucky Wildcats and the Tennessee Volunteers at Lindsey Nelson Stadium in Knoxville, TN. Photo By Andrew Ferguson/Tennessee Athletics

Tennessee baseball brought the excitement back to Lindsey Nelson Stadium this season, winning 29 games at home with seven coming on walk-off hits and four on walk-off home runs.

The winning and the style in which Tennessee did so brought an energy to the Vols’ program that hasn’t been seen this century.

“It’s unbelievable,” relief pitcher Redmond Walsh said of the environment at Lindsey Nelson Stadium this past spring. “You go to games as a kid and I don’t even remember ‘05 games being that crowded. You go to games as a kid and kind of see stadium’s half full or even my freshman year we had mid weeks where it felt like we may have 10 people at the game to now we have weekend series, super regionals and regionals where the stadium is completely full and then you have an extra 1,000-2,000 fans sitting outside the stadium. It’s unbelievable. I think the players bought in early but the fans are starting to buy in and believe in coach Vitello and his staff and the players they bring in every year. Tennessee fans are the best in the world about being there for teams. They showed out unbelievably over the last weeks of the season.”

Following the 2021 season, Tennessee head coach Tony Vitello signed a contract extension paying him $1.5 million a year. Up next for Tennessee’s program is renovating Lindsey Nelson Stadium, something that’s been a priority for Vitello for some time.

So what do current and former Tennessee players think the Vols’ should prioritize in the stadium renovation?

“I know they’ve talked about expanding the porch and adding box seating,” Walsh said. “I don’t know if there’s one certain area but just getting more stands in there. That’s what we learned from us going to Hoover and Omaha. Tennessee fans will show out if you have available seating. I went and ate with Chase Dollander on his visit and we were talking about Hoover and Arkansas— who has a great fan base— I think we outnumbered them 60% to 40%. It was crazy because that’s how much Tennessee fans love their sports. That’s the biggest thing, just trying to get as much seating in there as possible as quickly as possible and just let everything work itself out.”

Adding seats is the priority and will likely be included in the first part of the renovations. Tennessee is likely to add seats down the left field line, tearing out the patios and adding bleachers or chair backs as well as premium seats at the top of the concourse that could parallel the coach’s offices down the right field line.

While the stadium itself needs plenty of work, the bowels of the stadium and player development areas don’t need nearly as much work.

“I don’t think our facilities are as bad as people think,” Pavolony said. “We don’t need the world to workout and we have a weight room and we have a really nice hitting facility and have all the data we need and our video guys have what they need and get us what we need. Our nutrition and team room is great. They’re gonna add seats but at the end of the day I don’t think they can add enough seats for Tennessee fans. I just hope they maximize it.”

The July 22 State Building Commision meeting did not discuss Lindsey Nelson Stadium renovations. Any renovations to the stadium will have to be approved by the commission. The next meeting is Sept. 9.