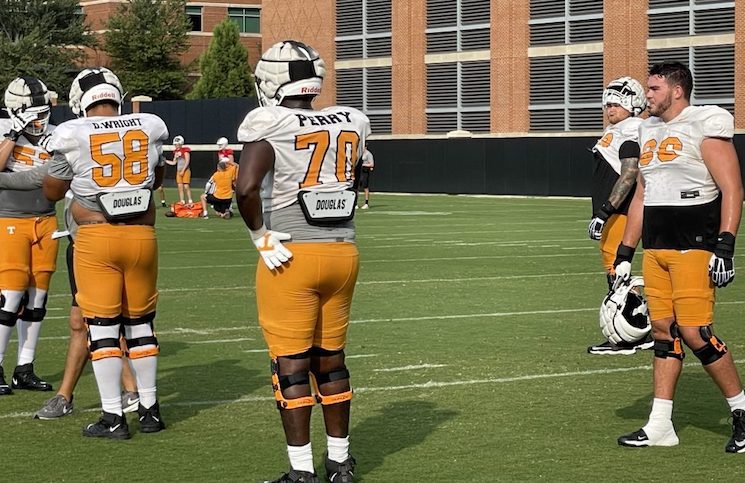 Tennessee started four former five-stars and 24 total stars across its offensive line last season. The hype surrounding that unit matched its star level but the play did not.

Tennessee’s offensive line underachieved— particularly in pass blocking— last season but the Vols’ are looking for a bounce back season up front. The Big Orange’s front five doesn’t have the star power it did a season ago, but Tennessee believes it has strength in numbers.

“We’re deep along the offensive line,” Tennessee guard Jerome Carvin said. “It’s a lot better than when I first got here. We got 16-17 guys and I know a good 14-15 are battling. There’s definitely battles along the line of scrimmage and battle at each position— especially the tackle spots as well as the interior. We all make each other better each and every day but it’s a competition. The best five get to play.”

Elarbee also failed to name a single starter saying it wasn’t fair to do so before having a full contact scrimmage. Still, the first year offensive line coach believes the strength of his unit is its depth.

“I do think we’re deep,” Elarbee said. “I think that’s the neat thing. There’s four or five guys slotted in at guard and the same thing at tackle. You have guys that can bump and move at tackle like JC (Jerome Carvin) can at center. Cade can at guard. Those guys give you enough flexibility that you’re deeper than you would (be) if you just one guy is backing up one position. Even Dayne (Davis) has been able to slide back and forth (from each tackle spot) to help us as well.”

That flexibility along the offensive line is important and will likely be tested early and often. Elarbee failed to comment on offensive tackle K’Rojhn Calbert injury that kept him out of practice Monday.

If Calbert is out for a significant amount of time, Tennessee doesn’t appear to have the depth along the offensive line that its players and coaches demonstrated Monday. Cade Mays, Dayne Davis and Darnell Wright are all capable players but after that the tackle spot is full of question marks.

Still, the flexibility of the offensive line and Elarbee’s attention to day-to-day details should provide competition that pays dividends on the field this fall.

“It forces us to be consistent,” Carvin said of the starters changing day-to-day. “It forces us to stack days and have real consistency. I think it’s great because the guys play harder and the guys who play the best in practice will play in the games. The motto is always the best five go out there and play. If you don’t play well in practice you won’t play.”

Elarbee has also seen a major improvement in players’ understanding of Heupel’s offense since the spring and believes that changes the upside of his unit.

“They understand the game of football better now than they did (in the spring),” Elarbee said. “A lot of that is just installing the offense, I’m sure. But more conceptually, what you can talk about without having to see a picture. That’s when I think you know you;ve got learning— when you can talk about a defense, where all the bodies are and they can conceptually see it versus what they’re trying to do rule wise. … I feel like they’re enjoying learning the game of football.”

Tennessee’s offensive line having the conditioning to play at an uptempo pace will be a major factor in their effectiveness this fall. Elarbee said the Vols’ offensive line was where it needed to be on that front right now but that they still have a long way to go.