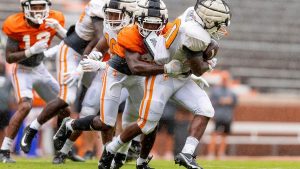 As the Vols secondary continues working on getting better, before the season opener against Bowling Green, Coach Martinez is loving the effort from his group. This is an experienced group that can really on guys who’ve got a better footing on what the coaches are asking, while some of the younger DB’s continue to work on their game. This is the benefit that Willie Martinez is hoping his group can take advantage of, as we’re officially two weeks away from the opener.

“As a group, I said it earlier, I think the group, having Theo and having Alontae, having KG — we haven’t talked about KG, Kenneth George — Tank, Flowers. There’s an experienced group there and they’ve done a really good job of tying in the new guys in there. Staying connected. And basically, it doesn’t really matter the four or five guys, or the six guys, that are out there. It’s been really great competition. I think the confidence level is really high. They’ve been able to be consistent in their execution. And everybody has been able to push guys. We’ve said who cares if you’re running with the first group, we’re really interchangeable, moving guys in and out, trying to figure out who can do what and we’ve been able to do that even though camp here.”

Willie Martinez met with the media this afternoon to discuss the ongoing fall camp and which players have taken the next step, in terms of understanding what this team needs. He also pointed out multiple players who’ve already made an impact on this defense.

Linebacker Juwan Mitchell discusses why he transferred from Texas, which players have stood out to him on defense, sharing the same mentality as Jeremy Banks and how he positioned himself to succeed this season.

Roman Harrison continues to work at OLB and will be looked upon this season to cause disruption in the backfield. He discussed working within this defensive scheme, how he has progressed since missing most of spring practice, and which players are standing out on defense.

For Solon Page, it was a wild spring for the linebacker group, as they dealt with multiple injuries, forcing him to take on a leadership role within the room. He discussed how much the group has benefited from players returning, adding depth to the position group. Page also discussed the progress that Jeremy Banks has made over the last six months, especially coming back this fall camp, healthy and ready to go.

As this team continues to prepare for the season opener in two weeks, the focus will be on how this group can continue finding ways to cause problems for the opposing team.