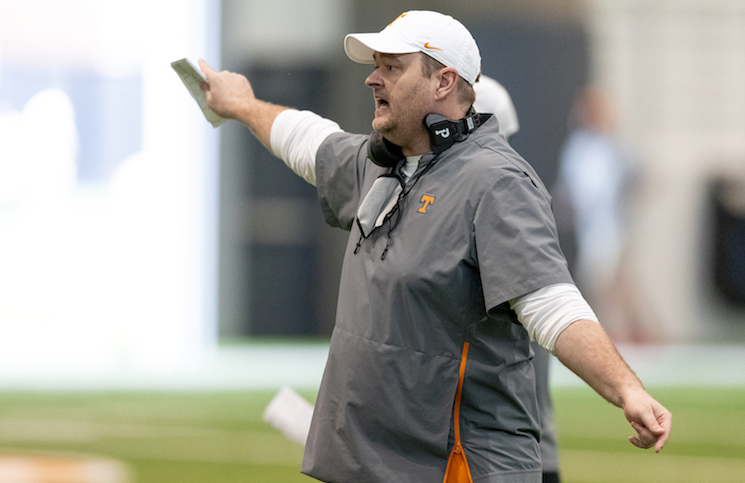 There is competition at multiple positions on special teams, but Paxton Brooks has locked up the starting punter job. The preseason Second Team All-SEC selection averaged 43.6 yards per punt last season.

“You have some real experience with Paxton (Brooks),” Heupel said. “His consistency as a kick off guy, as a punter is important to our program, right. A guy that, in some respects, it’s easy for fans or our staff to take for granted in some ways.”

While the punting job is locked up, there is competition at kicker between USC transfer Chase McGrath and Toby Wilson.

Wilson was Tennessee’s starting kicker the final two games last season after Brent Cimaglia opted out of the season. The Brentwood, Tennessee native didn’t attempt a field goal but went 7-of-8 on extra point attempts.

McGrath was a three year starter for USC before the 2020 season. In three years, McGrath went 32-of-42 on field goal attempts, including a 9-of-15 mark on kicks longer than 40 yards.

“Field goal battle has really been the same way,” Heupel said. “Those guys are competing in a really good way. We’ve put them in a lot of competitive situations. Ending practices that way, may day field goal situations, trying to put them in a real live situation. We’ve ended all our scrimmages with those guys having to drill one at the end. I like what they’ve done.”

McGrath has more experience and a bigger leg than Wilson, but don’t sleep on Wilson. His consistency has kept this battle alive with kickoff only 10 days away.

“Returners, there’s some experience there with Velus (Jones Jr.),” Heupel said. “He’s a guy that’s done it at a very high level. We still have a competition at the punt returner spot so we’ll see how that unfolds this week.”

Junior college transfer Tiyon Evans, freshman Jaylen Wright and sophomore receiver Jimmy Calloway have fielded punts in open media portions of practice this fall. Whether Tennessee sticks with one punt returner the whole season or rotates different options will be fascinating to watch this fall.

Heupel put an emphasis on special teams in his first press conference this fall. His team responded well, taking the third aspect of football just as seriously as offense and defense.

“Our guys as a whole, collectively, coach Ek(eler) does a great job of leading them,” Heupel said. “(There’s) great energy, great effort, playing with really good technique‚— we’re going to continue to grow that way as we go through the season— but I like the importance and attitude our players have about how special teams affects the game.”

That emphasis and attention to detail is important for a team that will likely be between a touchdown favorite and touchdown underdog in four to five games this fall.

The Vols will have growing pains— especially on defense— but special teams represents an area Tennessee should be effective in from game one of the Josh Heupel era on.