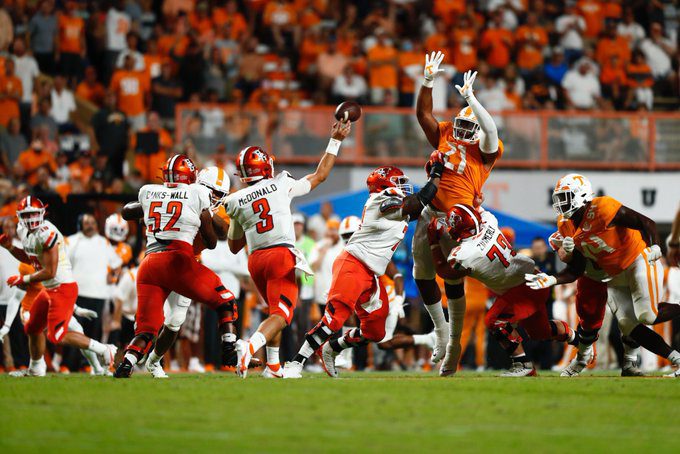 Josh Heupel’s Tennessee debut didn’t provide the offensive fireworks and passing stats that fans were expecting from the former UCF coach. Instead, Tennessee leaned on its play on both lines of scrimmage in the 38-6 win over Bowling Green.

After striking a strong balance of run and pass in the first quarter— 17 runs and 11 pass attempts— Tennessee increasingly leaned on its run game as Joe Milton and the passing attack had its struggles.

In fact, after Bowling Green cut Tennessee’s lead to one possession at halftime, the Vols turned to the ground with an eight-play, eight-runs touchdown drive to take a 21-6 lead early in the second half.

Both Evans and sophomore running back Jabari Small eclipsed the century mark in rushing yards. The one-two punch each recorded 116 yards and a touchdown, Small doing so on 21 carries and Evans doing so on 16 carries.

“I thought they pressed the line of scrimmage for most of the night,” Tennessee head coach Josh Heupel said of his running backs. “They did a really good job of getting vertical. Front wise, they (Bowling Green) were a little different than what we planned for but they (running backs) adjusted to it, handled it and delivered blockers. I thought they took care of the football and overall I was really pleased with their performance.”

The night wasn’t without adversity for Tennessee’s offensive line, however, Cooper Mays went down with an injury in the second quarter forcing Jerome Carvin to move to center and Ollie Lane to come in at guard.

“Inside I thought they did a good job with communication,” Heupel said. “With Cooper going out and Jerome getting everybody in sync and on the same page. In the run game we were pretty much hatting them up the way we wanted to— the right way. That part was really good to see from Jerome and obviously Ollie bumping in there.”

In total, Tennessee tallied 354 rushing yards on 64 carries, averaging 5.2 yards per carry with a long run of just 21 yards.

On the other side of the ball, Tennessee dominated Bowling Green’s offensive line. Behind a young front five, the Falcons ran for just 32 yards on 23 carries.

“I thought we changed the line of scrimmage tonight,” Heupel said. “We played on edges, played vertical, we’re going to need to continue to improve on that as we get deeper into our season but for week one I thought there were a lot of positive steps up front.”

A plethora of Tennessee defensive linemen flashed in the win with Kansas transfer Da’Jon Terry and sophomore Tyler Baron each recording sacks and Bryson Eason, Matthew Butler and Caleb Tremblay each contributing on a tackle for a loss.

Neither Omari Thomas or Elijah Simmons recorded a tackle in the blowout win but both turned in strong showings, each deflecting a pass at the line of scrimmage and Simmons living in the Falcons’ backfield for much of the night.

Under Rodney Garner’s leadership, Tennessee’s defensive line is developing into the best position group on the defense and maybe on the team altogether. One of the few units with quality depth, it showed up with veteran lineman Aubrey Soloman not playing.

There was a lot of room for improvement in Tennessee’s 38-6 win over Bowling Green, but the Vols’ play at the line of scrimmage separated them from their MAC foe.

However, the Vols won’t be able to beat teams with the sheer will of its running game going forward and Josh Heupel knows it.