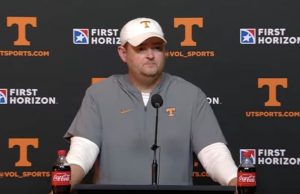 Tennessee head coach Josh Heupel took to the podium on campus today as the Vols get ready to play Pittsburgh this Saturday. Tennessee is 1-0 on the year after defeating Bowling Green in the season opener last Thursday. Heupel was pleased with the effort from his team, although, he did talk about many places that need to be improved upon.

Tennessee will host the Pittsburgh Panthers this Saturday at noon ET. The game, better known as The Johnny Majors Classic, will honor the legacy and career of one of the great football icons that both schools share.

Below is everything that Tennessee head coach Josh Heupel said at his press conference Thursday.

“Some of it is just what you’re seeing from the other side of the football. If they are rugby (punting) it, spray and seal, making sure you’ve got guys back there to contain it. Also, you’re looking at potential fake opportunities, so making sure you are defending the field.”

On the play of Joe Milton III–

“He got off-balance a couple of times, but (there are) things he’s done right. I think he will be in a better position here this week.”

On the backup offensive linemen-

“If Cooper (Mays) wasn’t able to play, you would see a little more rotation there this week. Here in the last 48 hours, Coop has made some really good jumps, so we will find out Saturday morning where he is at, whether he is able to go or not.”

“In some ways, you’ve got to be patient. You’ve got to be able to create big plays in the run game and pass game. It’s a physical football game. The difference in the game between the two years in particular was the turnovers early, and not taking advantage of some of the opportunities. In 2019, we started extremely slow and there were some things we could have controlled on offense and some things that they did too. We made some adjustments over the course of the game and started to make some plays. It’s a good football team in all three phases, but on the defensive side of it, veteran, physical front seven. Their safeties do a great job in run support. You’ve got to be able to create some seams and make some big plays. It’s going to be man-press on the outside. You’ve got to be able to make some one-on-one plays.”

On any players affected by COVID-

On his assessment of Pitt quarterback Kenny Pickett-

“It’s just unique, I mean, played him three times in four years. A guy that has just continued to get better. His ability to make plays, and part of that is just processing, I think he understands his hot (routes), gets rid of the ball on time, he’s accurate, he’s got great command of what they’re doing and has a ton of experience. For us, we’ve got to do a great job of contesting plays on the outside, do a great job in some of their underneath mesh schemes of passing things off and playing it out. We’ve got to make him uncomfortable and push the pocket. It’s typical of any veteran quarterback that you’re trying to play, but certainly he’s got a ton of experience. They put the ball in his hands, and it’s a big part of the game.”

On how RB Jaylen Wright has done in practice this week-

“Everyone in this program has great confidence in him. Based on what we have seen from him consistently, he’s continued to grow from his first practice on the field to who he is now. We expect him to play on a really high level when given the opportunity and everyone has a great trust in him.”

“It was the first time we’ve played in all three phases: offense, defense and special teams. So, we have a lot of opportunity to grow. Coaches say going from week one to week two can be your biggest improvement. I think you have a chance to continue to improve and make big jumps throughout the course of the year. I think that is what really good football teams do. I do think we have an opportunity to jump in who we are, how we execute, how we play and communicate. It’s a big test for us. It’s a good football team. Our guys are excited, and we’ve had a great week of preparation. I like the mindset, the mentality and the effort they have shown up until this point. We have to finish it off the right way in the next 48 hours to give yourself a chance to play as clean as you can and play with great effort.”

“Jimmy (Holiday), early in training camp getting nicked up. He hasn’t had a lot of time on task of actually being on the field with us. Athletically and who he is inside our program, we have a lot of trust in him. Looking forward to seeing him to continue to develop. He’s got a chance to be a good player on the offensive side of the ball and on special teams, too. He got some action on special teams and played a major role for us early in the season. Looking forward to him having a good year.”

“I thought it was pretty seamless. There were a couple things that creeped up early in the game that could be better, just from different phases of the football game. I thought between trainers, strength and condition staff, communicated in situations coming up as far a special teams, had everyone ready for their opportunity. Offense, defense and special teams communication during the course of the game, I thought, was handled pretty well.”

“Yeah, certainly. Look at what they’ve done historically with the ability to put pressure on the quarterback. It’s a huge part of their success on the defensive side of the football. It changes the field position in the game. For us, everyone needs to be in sync up front, it’s going to be critical. For the most part, our five guys up front did a really good job. It’s everybody, it’s blocks breaking off, your protection being in sync, your quarterback being able to adjust and get it right. I don’t care if it’s the run game or the pass game, it takes everybody operating together. So, there are some positives, but things that can be a lot better this weekend. It will be a big test based off of what they do.”