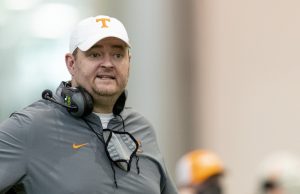 Tennessee head coach Josh Heupel spoke to the media on Thursday before the Vols’ game against Pittsburgh. The Vols will host the Panthers this Saturday in Neyland Stadium during the Johnny Majors Classic.

Heading into the game, Pittsburgh (1-0) is currently a 3-point favorite over Tennessee (1-0).

On Thursday, Heupel gave some updates to the team and spoke about their upcoming game. Coach Heupel spoke about his thoughts on Joe Milton’s play this week, his expectations from the Pittsburgh team, and much more.

Saturday will be a big early-season test for Tennessee. As Josh Heupel mentions, Pitt is a formidable opponent and will be the first big test for Tennessee. Pitt had 375 yards passing and 223 yards rushing during their 51-7 win against UMass in week one. Tennessee will give Pitt a tougher challenge, but the Panthers will be feeling hot coming into Knoxville on Saturday.