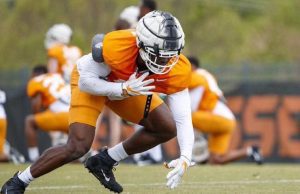 Tennessee’s defensive line has been one of the bright spots through two games in the season. However, it is also a unit that thought they would have Young playing from the start of the season. Young, a JUCO transfer, had a great fall camp, according to his teammates and coaches. And now, he will finally have his chance to prove it on the field.

“Byron will be able to play this week,” Heupel said on Monday. “It is a two-week- I guess being ruled ineligible by the NCAA.”

Heupel went on to talk about what Young will bring to the table for the Tennessee defense.

“[Byron Young is] a guy that has grown a bunch in our program,” Heupel said. “He’s added 25 to 30 pounds to his frame since when I first arrived here in late January, early February with our strength staff. Through training camp, through spring ball, he has been really good as a pass rusher off the edge. I think he is going to add some things that we need on that side of the football.”

Before arriving at Tennessee, Young was a defensive end at Georgia Military College as a junior college player. In between his time in high school and at Georgia Military College, Young also spent a year at Gulf Coast Prep Sports Academy. That year, in specific, was the cause of Young’s inability to play in the first two games for Tennessee this year.

Before the season, Young spoke about what individual goals he had set for himself during his first season at Tennessee.

“Honestly, I don’t try to think about that too much,” Young said during fall camp. “I just think about doing my part for the team and helping us in the best way I can.”

Tennessee’s defensive line, led by coach Rodney Garner, has been a welcome surprise for the team this year. The expectation was not for the unit to be bad, but they sure have been a stand-out aspect in both of the Vols’ first two games. In addition, part of that is due to the mentality that the unit has had since fall camp began.

“I feel like we have something to prove,” Young said before the season. “You know, everyone probably thinks we aren’t that good, that we’ve been short. But we’ve really been working right now. We’ve gotten way better than in the spring than anybody ever thought. I think we’re going to be pretty great this year.”