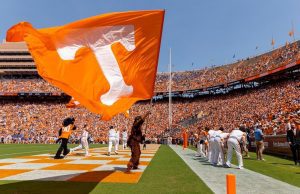 For the third straight game this season, the Tennessee Volunteers (1-1) will defend their home turf in Neyland Stadium this Saturday. The Vols will welcome in Tennessee Tech (0-2), a team that they have never lost to, as they look to get back on track after a loss to Pittsburgh.

The Vols’ week one game against Bowling Green was a promising start to the season. Tennessee finished the game with two 100-yard backs and was deemed the statistically fastest offense in college football through the first week. However, the Vols have found some trouble in the two weeks since. Week two saw a loss to Pittsburgh in the Johnny Majors Classic. And now, both of Tennessee’s top running backs are questionable heading into week three. Meanwhile, quarterback Joe Milton is still recovering from an injury that saw him taken from the Pittsburgh game.

Regardless though, week three should be a welcome opportunity for Tennessee to get healthy and get back on track. Especially considering on the other side of Saturday’s game lies an SEC opener at Florida.

Find out how to watch Tennessee hosting Tennessee Tech this Saturday, Sept. 18 below.

How to Watch – Tennessee Tech at Tennessee:

The Tennessee Athletics Department did send out a press release in regards to the watching experience on SEC Network+. The following read:

The game can also be accessed via ESPN+. ESPN+ is a standalone streaming service that requires a subscription separate from your TV provider credentials. It is available to stream through the ESPN App on your connected streaming device and on ESPN.com.”

Tennessee and Tennessee Tech have met on the football field six times during their program’s history. The Vols have never lost to the Golden Eagles. Meanwhile, in four of their six matchups, Tennessee held Tech to zero points on the scoreboard. In addition, Tennessee has never scored less than 36 points against Tech. The Vols are averaging 49.5 points per game against Tennessee Tech.