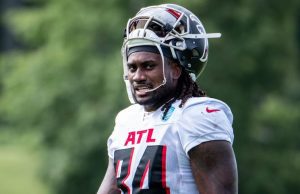 Former Tennessee wide receiver Cordarrelle Patterson is still making guys miss on the football field, in case you didn’t know. After entering the league in 2013, Patterson has played for five teams over the course of nine seasons. After spending his last two years in Chicago, Patterson took his talents to the Atlanta Falcons for the 2021 season.

On Sunday afternoon, Patterson found his first two touchdowns of the 2021 season. In addition, it was also his first touchdown with the Atlanta Falcons, marking the fifth team that Patterson has recorded a touchdown for.

In the second quarter of the Falcons’ game against the Buccaneers, the Atlanta offense was 11 yards from the endzone on the first possession of the quarter. Matt Ryan pitched the ball back to Patterson on second down. With a full runway ahead of him to build momentum, Patterson sliced and diced his way into the endzone for six.

Then, with less than two minutes remaining until the fourth quarter, Patterson found his second touchdown on the afternoon and on the season. However, this time, the former Volunteer caught a pass instead of running the ball. Patterson lept in the air, pulling down a Matt Ryan screen pass with one hand. He then took it seven yards into the endzone himself for the score.

At the time of this publication, at the end of the third quarter, Patterson has 14 yards on six carries. However, one of those carries did end up going for a score. In addition, the wide receiver/running back hybrid also has four receptions for 57 yards and a touchdown so far.

In the Falcons season opener against Philadelphia, Patterson led the Falcons with 54 yards on seven carries on the ground.

The Buccaneers are currently leading Cordarrelle Patterson and the Falcons, 28-25, at the end of the third quarter. The game is currently ongoing at the time of this publication.