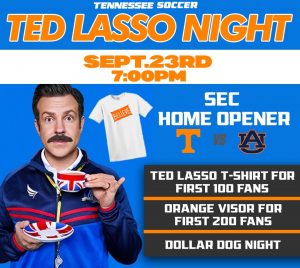 Tennessee will be hosting a “Ted Lasso” theme night on Sunday. Photo courtesy of Tennessee Soccer (@Vol_Soccer) on Twitter.

While the fictional character of Ted Lasso himself coaches all the way across the pond, the Lady Vols’ soccer team is bringing the magic to Knoxville. On Wednesday, Sept. 23, Tennessee will be hosting their first-ever “Ted Lasso Night” during the women’s soccer game on campus.

The Lady Vols won their first seven straight games to kick off the season. All of those were non-conference games, and three were on the road. The Lady Vols opened up their SEC schedule when they took on Arkansas, on the road, last Friday. Tennessee lost their SEC opener to Arkansas 3-1. However, the Lady Vols will have the chance to rebound on Wednesday, when they open up conference play in front of their fans in Knoxville.

Wednesday’s game against Auburn will be Tennessee’s first Ted Lasso theme night, where the fans will have the chance to receive a free t-shirt and visor.

Knockadoodledoo, Vol fans! We may not have any Emmys in our future, but you've got Ted Lasso Night in yours! See you at Regal Soccer Stadium tomorrow night for the SEC home opener! #Believe pic.twitter.com/Y4vBNnvdT2