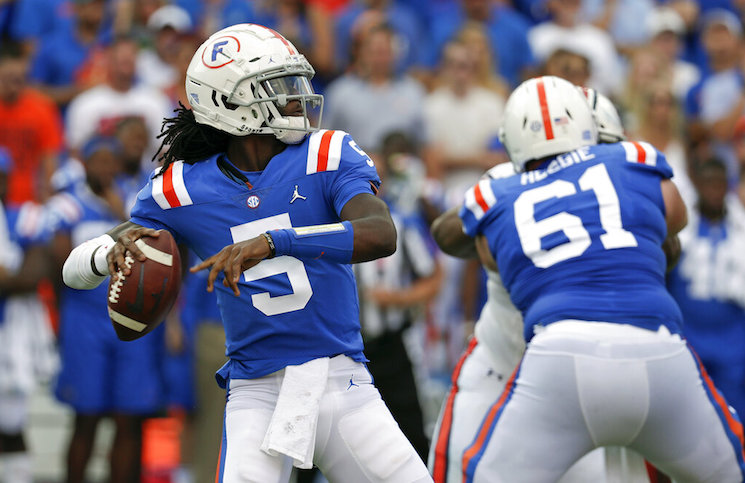 *Some answers have been altered for clarity.

Question: What were the expectations around the program entering this season after losing Kyle Trask and Kyle Pitts? How has the team performed compared to them so far?

Answer: There were a lot of questions coming in for Florida coming in, mostly because of not just the talent you lost but a philosophical shift on offense. They were going to go back to more of a quarterback run game and an offense led by a running attack. You’ve definitely seen that the first three weeks. Florida ran really well against FAU and USF the first few weeks of the season but the big question was would it translate to SEC play. We talked about expectations before the season, we didn’t know how this offensive line was going to react. The offensive line was probably the biggest question for the offense besides quarterback because they have struggled a lot over the last couple years and now going back to this run approach, the offensive line has seemed to really benefit from it.

Another question was quarterback. How can Emory Jones replace Kyle Trask? Passing is still a lot to be desired. He struggled those first couple weeks with issues we had heard coming into the season like accuracy and timing and anticipation. Those things showed up the first couple games but he’s settled down. It was a game plan built around what he does well against Alabama so I think Dan Mullen’s game planning and play calling has really helped Jones settle down. He didn’t make that deadly mistake you’ve seen the first couple games with a game plan built around him.

Q: Florida was one of the most pass heavy teams in the country last season, how has the offense been able to be so effective running the ball this season?

A: We talked to Dan Mullen about that on Monday. Their identity as a team last year was having a top five passing attack in the country. Now you have a top two rushing attack in the country a year later. He’s been able to adapt. The way he described it is pretty good— this is the offense they built back in the early 2000s at Bowling Green.They’ve had to build around it and adapt to personnel. They’ve done it for so long now that with whatever talent they have they can build around it with the base of the offense. A lot of the questions were the offensive line and how they could hold up. This is going back to the offensive line coach John Hevesy’s bread and butter. This is what he knows, recruits for and develops for. For him and his coaching, he’d rather his offensive line move forward 40 times a game and run block then drop back and pass block 40 times a game. That’s how he knows how to coach. The offensive line has a mix of veterans and young guys. The right side of the line with Stewart Reese, who transferred in from Mississippi State last year, and Jean Delance— those guys struggled last year but they look like brand new players out there in this run-first offense. Richard Gouraige is at left tackle, Ethan White is at left guard. Those guys have really performed well and that left side is the stronger side for that Florida offensive line. Then, Kingsley Eguakun he’s in his second year now playing center and is doing really well. He’s the strength of this group and this offensive line has made major strides with this offense.

Q: How would you assess the play of Emory Jones so far this season and is Anthony Richardson expected to play Saturday?

A: Emory Jones is not going to be as consistent as Kyle Trask. We knew that coming in. you’re going to get a lot of highs and you’re going to get a lot of lows. You just hope the highs are some of those big plays. The arm consistency, the arm talent— don’t get me wrong he can chuck the ball down the field, he has a live arm— but it’s going to be up-and-down when he’s throwing the intermediate routes, the short routes and the timing routes. That’s where Emory Jones can get better, that’s the big question of what he can bring to the table consistency wise. He’s going to be an inconsistent quarterback; it’s just that the highs have to outweigh the lows. The first two weeks he didn’t do that. There were a lot of forced throws. There was a lot of him locking on to his first read and not coming off of it. The anticipation wasn’t there, the timing wasn’t there. The issues we heard dating back to the springtime, but he stepped up to the plate against Alabama.

Anthony Richardson is the most explosive player Florida has on the roster. We’ll see where he’s at this week. Mullen said he’s very similar to last week but did pass his MRI last Friday. He could have played against Alabama in an emergency situation. We’ll see how Florida wants to insert him. Do they sit him another week? This hamstring is a lingering injury for him. This is really just about pain tolerance and Mullen says if there’s any harm where he could further injure himself then he’s not going to be out there.

Q: How was Florida able to limit Alabama’s run game last week? Did they perform at that level the first two weeks of the season?

A: That was one of the things I thought Florida would have versus Alabama and it played out that way. It didn’t play out that way to begin with but as the game wore on you could see that’s where Florida made a difference up front. Led by Zachary Carter, led by (linebacker) Jeremiah Moon— guys that have been in this Florida program for years, but it was instrumental that Florida bring in some transfers on this defensive line. You bring in Antonio Valentino from Penn State, Daquan Newkirk and Tyronne Truesdell from Auburn and all three guys have been instrumental at that defensive tackle position to go along with five-star Kirby Dexter who was a true freshman and played a lot last year. He’s making his presence felt. All those guys have had big plays and big moments in limiting Alabama’s ground attack. It starts with those guys. Florida needed some defensive tackles for starter roles and depth. Florida just didn’t have a lot of depth in those roles and now you’re seeing it come to fruition.

Q: What’s a matchup you feel like Florida is looking to/can exploit against Tennessee?

A: Probably will go defensive line. I like the makeup of this defensive line and it’s just so deep. In SEC play, you’re going to go through injuries, you’re going to go through some offensive lines that can maul you at the same time and that’s really where Florida got hurt last year. You go back to the Texas A&M game last year and they got run over. Same thing against Alabama. Georgia has the capability to do that so Florida needed to go out and address their needs in the transfer portal and really needed some veteran guys to step up more than we’ve seen the last couple of years. Tennessee has battled some injuries on the offensive line themselves so it’s just building on the performance you had against Alabama. Now I think the confidence is there.