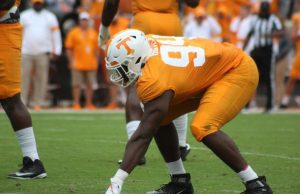 Specifically, against the run in the first three games of the season, the Tennessee defense has been lights out. The Volunteers are holding their opponents to an average of 54 rush yards per game, and no opponent so far has eclipsed 100 rushing yards in a game. One of the biggest reasons behind Tennessee’s success against the run has been the defensive line.

After the first three weeks of the college football season, Pro Football Focus has Tennessee’s defensive line as the third-highest graded group in the country.

Consistent up front through 3 weeks.@PFF_College rates the #Vols as the nation's third-highest graded defensive line so far this season. pic.twitter.com/C2KwgXiqEV

“I think we got the kids playing hard,” Tennessee defensive line coach Rodney Garner said on Tuesday. “They’re playing for one another. We’re playing vertically for the most part. We’re trying to create knockbacks. When you’re getting 10 and 11 hats to the ball, you have an opportunity to be successful.”

Tennessee essentially forced Tennessee Tech and Bowling Green to abandon the run game. Not only did those two teams need to counter early deficits, but Tennessee also just shut down the running lanes. In both of those games, Tennessee’s opponents had more passing attempts than rushing attempts. Meanwhile, while Pittsburgh did collect 96 yards on the ground, they averaged 2.1 yards per rush attempt. The Panthers were dedicated to the run, even though the Vols defensive line kept giving them nothing to work with.

“Each game, we want to see improvement and making strides to get where we want to be,” Garner said this week. “It’s like climbing Mount Everest; we’re not going to be there overnight. We know it’s a process, but we’ve got to embrace the process. Unfortunately, now we’re in conference play, we’ve got to accelerate the process. So, we’ve got to get better in a hurry.”

One of the Vols’ main reasons for needing to accelerate the process is due to their opponent this weekend. Tennessee drew no favors by opening their SEC schedule on the road against Florida, and it only became more evident when the season began. Through three weeks, Florida has the second-ranked rushing attack in the country, with over 336 yards per game. Not only do they have effective running backs, but the Gators’ quarterbacks have been also lighting things up on the ground. Garner also spoke about Florida’s quarterbacks during his press conference on Tuesday.

“They’re a two-headed monster, with Emory (Jones) and the Richardson kid (Anthony Richardson),” Garner said. “They’re both very good. They’re both dynamic runners. Actually, 15 (Richardson), may be more dynamic, as far as pure elite speed. But Emory is a seasoned veteran, he’s got three years in that system, so he totally understands what Mullens is trying to do. They do a great job with power, the counter reads, and they don’t put them in situations for them to beat them. They give them situations that are conducive to them being successful, via the RPO’s off the run. Then you throw in the quarterback run, which now they’ve got an extra guy we can’t account for with hats. So, it makes us have to make sure that we’re being really dialed in and detailed to doing all of the little things correctly.”

“I think we’re moving the needle in the right direction,” Garner said. “But every week, it’s a new challenge. And the challenge is, are we going to be better this week than we were last week?

Tennessee will take on No. 11 Florida this Saturday night in Gainesville.