After the mystery went on all week leading up to the Vols’ game against Florida tonight, a report on Saturday afternoon stated that Hendon Hooker would be the starting quarterback for Tennessee against Florida.

“Hendon Hooker will start at QB for Tennessee vs. No. 11 Florida today, sources tell On3 Sports,” Matt Zenitz, a senior national college football reporter for On3 Sports, said on Twitter on Saturday.

However, the report does not mention Tennessee quarterback Joe Milton III’s health status and how that may or may not have affected the decision.

Leading into Vols’ trip to Florida, Tennessee head coach Josh Heupel was vague, at most, about Milton’s status. Although Milton was the No. 1 quarterback on Tennessee’s depth chart last Monday, the indication quickly into the week was that Tennessee did not have all the information it wanted yet. During his final press conference before the game last Thursday, Heupel spoke about his quarterback before anyone even had the chance to ask.

“Don’t have an update on the quarterback status right now,” Heupel said about Milton. “Joe’s gotten some work over the course of the week. We’ll find out more tomorrow with him.” 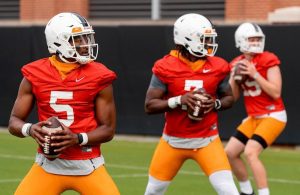 Hooker is 33-of-47 for 392 yards in the Vols’ first three games. While Hooker is the only quarterback to appear in all three games, he only attempted one pass in the season opener. However, Hooker also has five touchdowns in the air on the year, with only one interception.

Meanwhile, while Milton’s power and strength were the most significant aspects of his running game, Hooker uses his finesse and footwork to his benefit. Hooker has 113 yards on 18 attempts, which is good for an average of 6.3 yards per rush. Like a wide receiver or tailback, Hooker often uses shifty jukes, such as open field spin moves, to get around the quickest players on the defense. He also has one touchdown on the ground this year.

Through three games of the Tennessee season, both Milton and Hooker have made their first career start for the Vols. Milton was the starter for the Tennessee opener against Bowling Green and followed that with a start against Pittsburgh in week two. However, as the first quarter was winding down against the Panthers, Milton would receive an injury that would take him out of the game. Hooker was the replacement for Milton, finishing out what would eventually be the Vols’ first loss of the season. However, with Milton out of game-attire against Tennessee Tech in week three, Hooker was given his first start of the year.

The Tennessee team has yet to announce a starting quarterback against Florida officially, and the game is still hours away at this publication. In addition, the health status of Vols’ QB Joe Milton is still unknown. However, on Saturday afternoon, Matt Zenitz of On3 Sports reported that Hendon Hooker would be the starting quarterback for Tennessee in The Swamp.

Click here for more information on Tennessee and Florida tonight in Gainesville, including viewing options, key statistics, and odds.