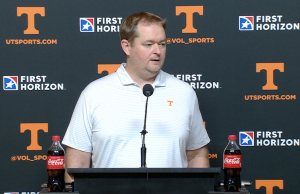 Tennessee HC Josh Heupel at his Monday press conference to kick off Week 5.

Like any other traditional week during the college football season, Tennessee head coach Josh Heupel kicked off the fifth week of the Vols’ season with his routine press conference on Monday.

Tennessee is 2-2 heading into their second SEC matchup, following Saturday’s loss to Florida. The game, to sum it up broadly, was a tale of two halves. That was something that Heupel, along with the Tennessee players that were available on Monday, spoke about. To them, Florida’s run in the second half wasn’t based around anything new the Gators had installed during the game. Instead, Tennessee just didn’t execute in the areas it needed to.

Coach Heupel spoke about several topics from the game that was fresh on his mind. Before his media availability, Heupel and the team went over the game tape from Florida in the morning. Heupel gave some insight into different situations that occurred on Saturday, such as the communication mix-up between Velus Jones Jr and Trevon Flowers on a punt return. The mix-up was due to both players wearing No. 1 on their jerseys.

In addition, before even taking questions from the media, Heupel did speak about some player’s health status coming out of the weekend. However, almost all significant injuries are still too soon to get a read on. That includes Tennessee quarterback Hendon Hooker, as well. Heupel did speak about his evaluation of his quarterbacks as a whole but was not willing to reveal too much.

The Tennessee Volunteers (2-2, 0-1 SEC) and head coach Josh Heupel will be back on the road this Saturday afternoon. The Vols will play their second SEC road game in two weeks with a matchup against Missouri (2-2, 0-1 SEC) on the horizon. The SEC Network will carry the broadcast at noon ET.

“After an opportunity to review the film with the guys today, obviously we just pointed out the things that are controllable by us, coaches and players alike, that need to and can be better,” Heupel said on Monday. “There’s an opportunity for us to continue to grow from it. The guys had a great attitude and energy inside the building, anticipate that (going forward). We have another road test here inside the league against a really quality opponent, and looking forward to that opportunity to go down to Missouri and play football.”