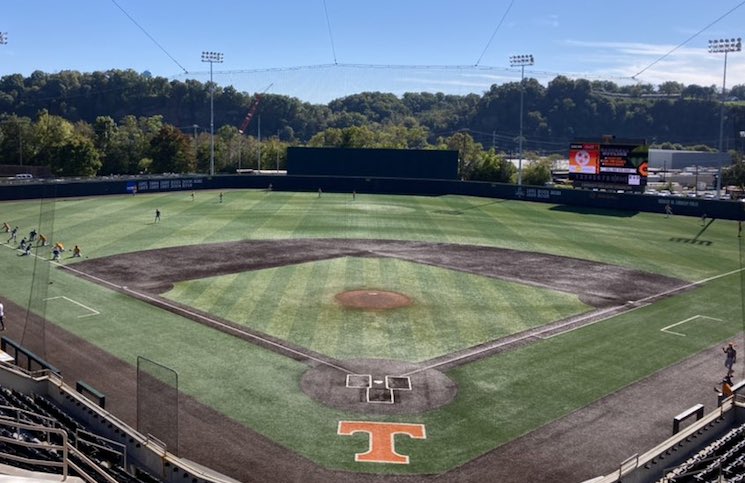 Tennessee baseball is just over halfway through its fall baseball season with scrimmages against Georgia State and Louisiana Tech still on the horizon.

While the Vols haven’t faced an opponent yet this fall, Tony Vitello’s fifth team has gotten plenty of work in during intrasquad scrimmages.

I’ve had a chance to watch five of Tennessee’s intrasquad scrimmages so far this fall.

Here are my notes and observations.

Let’s start in the infield where Tennessee is replacing starters at second base, shortstop, third base and catcher.

The Vols have six infielders in the thick of the competition for the second base, shortstop and third base spots. Players have worked at different positions, especially in practice, but here is who the starters have been in most scrimmages.

Jorel Ortega and Trey Lipscomb at third base, Cortland Lawson and Logan Steenstra at shortstop and newcomers Seth Stephenson and Christian Moore at second base.

All six of those guys have had their moments but Cortland Lawson and Christian Moore are the two that have jumped out to me. Lawson sat behind Liam Spence and Steenstra last season at shortstop but made the most of the opportunities he had, hitting .357 with a home run in 14 at-bats.

Lawson’s bat has been really solid this fall and while he doesn’t seem to have the range as Ricky Martinez or Spence at shortstop but appears to have a steady glove.

Moore, the nation’s No. 91 prep prospect, is the second highest rated Tennessee signee that made it to campus and the infielder has been really impressive. The Brooklyn, New York native has hit for power and contact really well and has been one of Tennessee’s best hitters this fall.

The true freshman isn’t Max Ferguson in the field. However, I’ve been impressed with his range and consistency.

Junior college transfer Seth Stephenson’s speed lives up to the hype. He’s the fastest player Tennessee has had since Jay Charleston and if he earns consistent at-bats could be one of the SEC’s top base stealers.

Steenstra has had a solid start to the fall too and has improved with his consistency in the field since last season.

Let’s move to first base where Luc Lipcius— whose 15 home runs tied for the team lead last season— is back for a super senior season. The sixth-year player is the veteran in the room and a good leader for a team with so many newcomers around him.

Behind Lipcius is freshman Blake Burke. The Brentwood, California native is a really good hitter for his age with a nice left handed swing.

Lewisburg, Tennessee native Kavares Tears has been one of the most impressive newcomers this fall. Tears bolsters a powerful left-handed swing. I’ve seen Tears hit a handful of extra-base hits despite not earning as many scrimmage at-bats of some Tennessee starters.

The question on Tears is where he ends up playing. Tears is spending most of his time at first base this fall, but could also end up in the outfield. Tennessee wants to involve his bat this season and the path to playing time is much slimmer in the outfield.

Something I’m curious about at first base is if Tennessee gives Lipcius a shorter leash against left-handed pitching this spring. Lipcius hit 5-for-50 against lefties last season and while Tears and Burke are both left-handed too, Lipscomb and Jordan Beck have gotten some experimental work at first-base.

It’s been an experimental week for Beck. The power hitting junior started exclusively in right field last season, but has earned scrimmage reps in centerfield, third base and first base the last week.

Beck has one of the best arms on the team, so that wouldn’t be a problem at third base for the tall right hander. The Alabama native was shaky at third base Tuesday, committing an error and not making another play you’d want your starting third baseman to make.

How long, or much, Tennessee experiments with Beck in the infield is to be determined but I’m not sure I’d read too much into it yet.

Let’s move on to catcher, as I’ve really buried the lead here. Tennessee lost Connor Pavolony to professional baseball and Jackson Greer to graduation. The Vols brought in West Virginia transfer catcher Matt McCormick before the left-handed bat decided to hang up his cleats.

Now, Tennessee doesn’t have a catcher who has caught behind the plate in a college game. Evan Russell is working exclusively at catcher this fall and sophomore Charlie Taylor and freshman Ryan Miller have been earning an abundance of reps.

Tony Vitello is baptizing his catchers by fire, having his team run-and-run-and-run-and-run against them. The Vols’ backstops haven’t held up great. Tennessee is stealing tons of bases right now, both at second and third.

It’s not all doom and gloom behind the plate. Evan Russell has had some real positives behind the plate. The super senior has a good chemistry with Tennessee’s pitchers and doesn’t allow many passed balls. The Tennessee native has clearly improved this fall too. The first scrimmage I watched he had two catcher’s interference. Since then, I haven’t seen him have one.

Tony Vitello is meeting with the media Thursday and it will be interesting to see what he says of his catchers.

On to the outfield, where Tennessee returns its top five contributors from a season ago. As previously noted, Russell is now working at catcher and Drew Gilbert, Beck, Christian Scott and Kyle Booker are earning the bulk of the work in the outfield. Those guys have all been solid and Scott is turning in a strong start to his senior campaign.

Junior college transfer Logan Chambers has shown the talent at the plate that made him a sought after recruit but he hasn’t found a home yet. Chambers has mostly worked at the corner outfield spots but has struggled in the field.

Junior Ethan Payne has earned a lot of reps this fall in an abundance of places including right field.

On the mound, the Vols’ highest rated signee to make it to campus Chase Burns has been impressive. The 6-foot-4 right-handed pitcher throws heat and has a really good breaking ball for a prospect his age.

Tennessee has a lot of really solid starting pitching options so I don’t think Burns is a lock there by any means, but I think he’ll be in the thick of that competition and will have a big role on the 2022 Vols either way.

Georgia Southern transfer Chase Dollander and senior Camden Sewell have been impressive this fall too.

Sophomore LHP Jake Fitzgibbons seems to have made a jump after a disappointing freshman campaign. Fitzgibbons impressed in his freshman fall and preseason before catching COVID-19 right before the 2021 season.

The Mt. Juliet, Tennessee native never regained his footing last season, but has impressed this fall as his fastball is up to 94 MPH.

Tennessee has great pitching depth but doesn’t have an abundance of strong left-handed arms. Redmond Walsh and Kirby Connell are the only two lefties returning that earned serious innings.

Zander Sechrist, Will Mabrey and Fitzgibbons are all working to earn the trust of Vitello and pitching coach Frank Anderson heading into the season.

Tennessee’s first preseason scrimmage is this Saturday in Chattanooga against Georgia State. The Vols will travel to west Tennessee next Saturday to face Louisiana Tech.