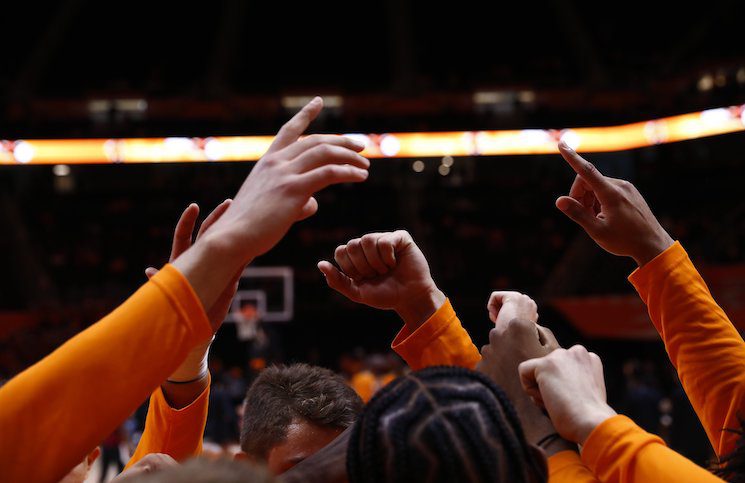 Lenoir-Rhyne hung around with Tennessee for the first 10 minutes of Saturday’s exhibition game at Thompson-Boling Arena. Then the Vols took full control, opening up a 21-point lead at the break before cruising to a 103-62 victory.

Tennessee brought in a monster freshmen class that included seven players and ranked fourth nationally according to the 247sports composite rankings.

Both of those blue-chip recruits impressed in their first ever taste of college basketball.

Chandler — the nation’s No. 1 prep point guard — was the best player on the court totaling 21 points on eight-of-10 shooting while adding five rebounds and six assists.

“I just try to keep my composure, stay calm, don’t let nobody rush me to my game, rush me to get a shot off,” Chandler said. “Just stay calm and keep my pace. That’s one thing coach Barnes really talks to me about in practice if I’m rushing too much. Just stay calm, have good pace, don’t be on a 1,000 speed at all times. Stay calm and change speeds.”

The Memphis, Tennessee native scored at will in the first half, totaling 18 points on seven-of-eight shooting from the field and three-of-three from beyond the arc.

Chandler looked incredibly comfortable in Tennessee’s offense, almost always making the right read and turning it over just one time.

Then there was Huntley-Hatfield. The intimidating power forward wasn’t nearly as integral a part of Tennessee’s offense — he didn’t start even with Fulkerson out — but the Clarkesville, Tennessee native impressed with his opportunities.

“He surprised me a little bit today,” Tennessee head coach Rick Barnes said of Huntley-Hatfield. “I wasn’t sure what to expect but there’s no doubt that Brandon the last two weeks has taken a giant step. He really has. He’s taken a giant step in terms of understanding want. He’s a guy that I’ll be disappointed— we’ll be disappointed— if he doesn’t get better every day.”

Huntley-Hatfield is the Vols’ most talented and imposing big man. Lenoir-Rhyne didn’t have anyone nearly as physical as him, but it’s clear Huntley-Hatfield can be a handful when he gets going.

Vols Bomb Away From Deep

Tennessee shot 46 three-pointers Saturday with 25 coming in the first half.

The year is 2021. You did not go back 15 years in time. Rick Barnes is Tennessee’s basketball coach. Not Bruce Pearl.

We knew Tennessee’s offense would have a different look to it this season with a true point guard and the possibility for a number of lineups with four threats from beyond the arc.

But 46 three-pointers? Against a division two school Tennessee easily could have imposed its will on inside the arc? That was shocking.

In the past, Barnes has frequently been upset when his team shoots 30 three-pointers in a game. Postgame, Barnes said the Vols have shot 40 or more threes in all three of their intrasquad scrimmages and in their closed door scrimmage against Davidson.

“We had some great looks today,” Barnes said. “I think Lenoir-Rhyne’s whole game plan was to force us into that. I told the coaches as the game was going on that in the past we would have been stubborn trying to pound it in there, pound it in there. There wasn’t a lot of space inside.”

“We’ve played ourselves twice in a 40-minute game, we played Davidson, in all three— all four— of those games we’ve shot over 40 threes.”

Nine different Tennessee players made three-pointers with the team connecting on 17-of-46 deep shots. That comes with Tennessee’s top two three point shooters a season ago— Santiago Vescovi and Victor Bailey Jr. — combining to shoot two-of-15 from three-point range.

Josiah Jordan James, Chandler and Justin Powell each made three or more three-pointers.

Olivier Nkamhoua’s development as a three-pointer is something we’ve monitored this season and the power forward showed he wasn’t afraid to let it fly, making one-of-three triples Saturday

Good And Bad From The Defense

Those questions showed up throughout Saturday’s lopsided win. Lenoir-Rhyne was able to play with Tennessee in stretches of the game thanks to streaky three-point shooting and some defensive lapses.

The Bears had stretches where they scored nine points in 2:03, eight points in 1:04 and seven points in 1:43. Those stretches highlight the worries for Tennessee’s defense. If the Vols aren’t more polished on the defensive end by the time they face Villanova on Nov. 14 they could get exposed.

“Defensively, we have to be more active,” Barnes said. “We have to get more deflections, we have to do a better job of guarding the ball 1v1. Give Lenoir-Rhyne credit, they spread you out.”

Still, as a whole Tennessee’s defense was solid. The Vols held Lenoir-Rhyne to 62 points on 39% shooting from the field and 29% from three-point range.

Let’s start with some rotation notes. Everyone for Tennessee played Saturday with nine players totaling 10 or more minutes.

Chandler, Huntley-Hatfield, Vescovi, Nkamhoua and James all played over 20 minutes while Bailey and Uros Plavsic each played 17 minutes. Justin Powell was next in minutes with 14 and Zakai Zeigler totaled 12.

Let’s hit on Justin Powell— the Vols lone transfer— the sharpshooter played just five minutes in the first half and lagged a bit behind the rest of the Vols’ main guards in playing time. Stil, the redshirt-freshman impressed, scoring 14 points on five-of-nine shooting from the field and four-of-eight from three-point range.

Powell was a bit streaky from three-point range, but made three triples in 1:46 of game time.

Zeigler was up-and-down in his debut, scoring seven points on three-of-seven shooting from the field. The freshman point guard’s shooting struggled but he also showed some impressive playmaking— especially late in the game while playing with walk ons.

Tennessee dominated on the glass against, out rebounding the Bears 48-33. The Vols controlled the offensive glass too, grabbing 16 offensive rebounds and 17 second chance points.

The Vols did a great job of taking care of the basketball too, turning it over just eight times in the win.