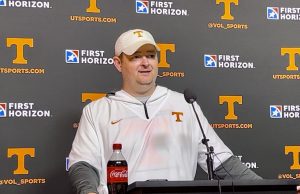 Tennessee HC Josh Heupel spoke with the media on Thursday before the Vols take on Kentucky this Saturday night.

Before the Vols take off for Lexington, Tennessee head coach Josh Heupel met with the media one last time in Knoxville.

All week, players and coaches alike have been echoing the same sentiment, that the open week was extremely beneficial for Tennessee. After injuries have continued to pile up throughout the season, the open week gave Tennessee a chance to freshen up their legs.

When it comes to Saturday’s game, Tennessee needs to focus on playing its own style of game. Through both teams’ first eight games, the Vols outrank the Cats in total yards, passing yards, and rushing yards. It’s no secret that Tennessee’s offense is best when balanced and when the run game is setting up the passing game. Defensively, the biggest challenge for Tennessee is going to be Kentucky’s rush offense. The Wildcats are throwing for an average of fewer than 200 yards per game, but rushing for about 175 per contest. Kentucky is led by junior running back Chris Rodriguez Jr, who has over 800 yards on the season.

During his press conference, Heupel hit several topics regarding the Tennessee team. Heupel spoke about Tennessee’s uplifting approach to mental health, the Vols’ fresh energy off of the bye week, and incorporating wide receiver Jalin Hyatt in the offense. Below is a full transcript for Tennessee head coach Josh Heupel.

“Good Thursday with our guys. Good energy, good focus, they’re excited to go compete. We are too as a coaching staff. It feels like it’s been a long time since we played, time to get back on the field.”

On how the bye week helped the team’s energy…

“I think our guys have continued to be better and better every single week. Energy and focus. It’s a group that loves to play at this point. They’ve learned how to continue to do it in a better fashion. When I say that, I’m just talking about the preparation and being more comfortable with the routine the further you get into it as well. It’s been a fun group to coach here at this point.”

“I think he has a really high ceiling. He’s always had some physical attributes. I think he’s going to continue to gain strength as he goes through our program, has a really bright future. I think as much as anything, he’s just matured in his approach inside the building, what he’s doing outside of the building. I think all that lends itself to better practice habits. His care factor continues to grow. His ability to be in the slot right now and rotate with Velus (Jones Jr.) has been big for us.”

“I think it’s one, you can see the style of offense. It’s one thing to talk about it when I first got here. Now, our recruits have an opportunity, at all positions but (specifically) at the quarterback position, to see what we are doing. Our ability to have an explosive offensive style of play, but then (also) the quarterback development they will receive here. Our track record of quarterback play at the highest level, you can look back at the different stops that I’ve had, and you can see it’s going to happen here too. Hendon is a guy that was in the portal, now is playing at a really efficient level right now. Continues to grow fundamentally, technique, his eye discipline, comprehension of the game, and becoming a guy that is extremely accurate with the football. His growth as a player should speak to the potential for some of these guys that are coming in here to have big time careers.”

On the resources available to players in regard to mental health…

“I think mental health is at the forefront of what we do here. It’s why we approach coaching and teaching the way that we do. We’re instructors. For young people, I think it’s finding balance in what they do as a student-athlete. From the pressures of playing college football at the highest level, to academics, to the social life that inevitability 18 to 22-year-olds are going to have, along with finding out who they are and how they’re growing, these are issues that come up in daily life for our players. They still have real lives. That’s issues back home, family members that may have serious issues, deaths in the family. There are all of these things that these young people are learning how to balance, juggle all of these balls and grow into the men that they’re ultimately going to be. Coaches are a resource, but we also have professionals that help our student-athletes as well.”

On how the offensive line has improved throughout the season…

“Before the season, it was a group that you didn’t want any injuries at. You didn’t want any injuries at any position, but it was a thin unit. Guys have continued to grow and mature as football players inside of what we’re doing. We’ve had a bunch of different rotations up front, from Coop (Cooper Mays) being gone, Jerome (Carvin) sliding, to Cade (Mays) being gone and multiple guys playing at guard. Kingston (Harris) was in there early and then him being banged up. With all of those things, the next guy up has kind of been the mantra inside of our building. I’ve said it before, the strength of one position group can never be one guy. Everybody’s got to continue to fight and prepare themselves. There have been a lot of positives, some things that they’ve had to continue to grow in. We’re still going to do that in the last third of the season. It’s a group that has continued to grow in their practice habits. They’ve had a better understanding of what we’re doing. Technique wise, they’re continuing to grow. That’s why, in a lot of ways, they’ve continued to get better through the course of the season.”