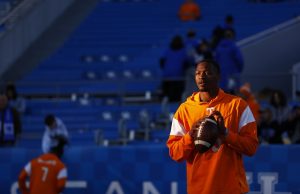 Well, that didn’t take very long at all.

On the first offensive play of the game, Tennessee quarterback Hendon Hooker threw a screen pass to his left, hitting wide receiver JaVonta Payton. As Payton caught the ball, he made a few moves near the sideline in order to get around a few Kentucky defenders. Then, it was off to the races.

Hooker’s pass to Payton on the first play of the game went for a 75-yard touchdown as Payton outran the entire Kentucky defense.

So that's a quick start then

With the open week in the rearview mirror, Tennessee’s players continued to preach all week long how fresh their legs and bodies felt.

Payton must have been ready to run after not playing last week, too. After taking the pass from Hooker, Payton flipped on the jets and took off down the field.

The Tennessee Vols’ game against Kentucky is still in progress. The Vols and the Wildcats are tied at 7-7, without about six minutes remaining in the first quarter at the time of this publication.