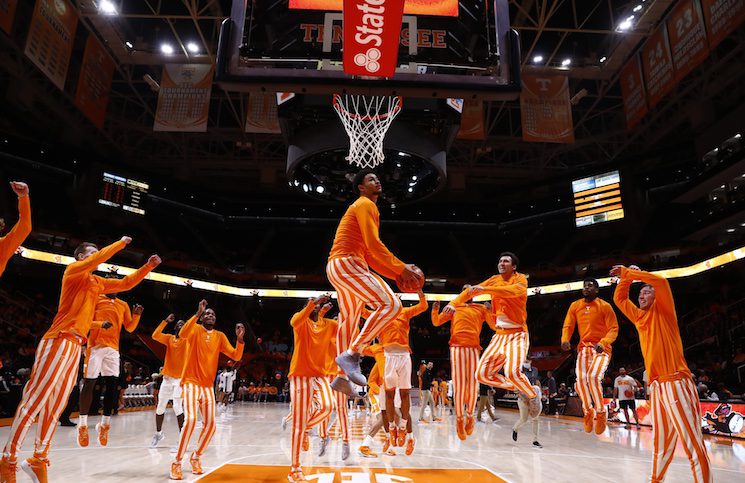 Tennessee let UT-Martin hang around for much of the first half before tightening up its defense to earn a 90-62 win in the season opener.

UT-Martin Hangs Around In First Half

Tennessee was 35.5-point favorites against a UT-Martin team that returned zero points from last season’s team. However, the Skyhawks hung around with the Vols for a half.

UT-Martin’s offense came out the gates red-hot, scoring 20 points in the first 7.5 minutes of game time. The Skyhawks made nine of their first 13 shot attempts and led for 8:35 in the first half — though they never led by more than four points.

While Tennessee continued to emphasize shooting three-pointers, UT-Martin primarily shot two-pointers. The Skyhawks had significant success doing so, making 66% of their two-pointers in the first half.

After both teams’ hot offensive start, defenses began to settle in.

From the 12:36 mark, UT-Martin scored just eight points in the next six minutes and 15 points the rest of the half.

While Tennessee’s offense went on a slump in the middle of the first half, the Vols used that strong defense to reclaim the lead and gain some ground on the Skyhawks.

In particular, a 10-0 run over 3:08 saw the Vols go from down two to up eight. Once Tennessee got its lead to eight, the Vols didn’t look back. Tennessee led by eight at halftime and opened up a 13-point lead by the under 16 timeout in the second half.

Tennessee brought in a eight newcomers including seven prep prospects this offseason. Kennedy Chandler led the way for the group playing 22 minutes, Brandon-Huntley Hatfield and Justin Powell each played over 18 minutes and Zakai Zeigler (14) and Jahmai Mashack (8) each played over five minutes. Quentin Diboundje got garbage time minutes.

If it wasn’t clear following the Vols’ exhibition win over Lenoir-Rhyne it became clear tonight, Kennedy Chandler is the lead dog on this basketball team.

The freshman point guard makes Tennessee’s offense click extremely well. The three-point barrage appears to be the identity of this UT offense and the Vols need someone with the ability to penetrate and pass like Chandler to make it all work.

Speaking of that three-point shooting, Auburn transfer Justin Powell lived up to his hype as a sharpshooter in his Tennessee debut.

The Clarksville, Tennessee native has great hands, recording two blocks in the win, and appears to have the highest defensive ceiling of any of the Vols’ big men.

Ziegler earning real minutes backs up what Tennessee’s coaches said about him in the preseason. The young freshman didn’t do much offensive — three points — but more than held his own on the defensive end. That was my biggest question on the 5-foot-9 guard entering the season.

Tennessee was without its most accomplished post player Tuesday night as super senior forward John Fulkerson missed the season debut as he’s working back from a thumb injury.

Uros Plavsic started in place of Fulkerson and struggled for much of the evening before finding some rhythm in the second half.

The Serbia native scored just six points on two-of-six shooting and the 6-foot-11 center had just one rebound. While Plavsic seems to have improved some of his deficiencies — he looked better against high ball screens — his rebounding and decisiveness with the ball is still lacking.

Olivier Nkamhoua struggled in the first half, getting outplayed by a pair of Skyhawks big men, but turned it around in a big way in the second half.

Nkamhoua scored 11 points — eight in the second half — while grabbing a game high 14 rebounds — nine in second half.

No other Tennessee big men earned playing time in the win.