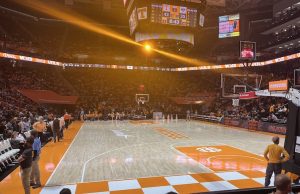 The Vols are back in action after taking down UT Martin in their season-opener on Tuesday night in Knoxville.

Tennessee won by 28-points, 90-62, but the big story of the night was the Vols’ shooting from behind the arc. Freshman guard Kennedy Chandler was a perfect 4-for-4 from deep, while Santiago Vescovi knocked down six shots from three-point range. Former Auburn transfer Justin Powell added in three buckets from deep as well.

However, from a defense perspective, it wasn’t the Vols’ hottest start. Tennessee did pick it up after the first half, but head coach Rick Barnes had several comments about the Vols’ defense after the game.

Is Auburn a SEC West contender?

Below is RTI’s instant reaction video from Ric Butler and Ryan Schumpert after the Vols’ win on Tuesday night.