Tennessee quarterback Hendon Hooker has been a revolutionary addition to Tennessee’s offense this year. Combined with the knowledge that Tennessee head coach Josh Heupel and his staff have brought to the table, Hooker has been able to flourish, leading Tennessee to the fourth-ranked offense in the SEC.

As the season has gone on, conversations have started to pop up about Hooker’s potential NFL career. The redshirt-senior quarterback is able to come back to Tennessee for another year, but could also forgo his final season and enter the NFL draft.

On Monday afternoon, Heupel spoke about how he goes about those conversations with his players.

“They’ll happen as we finish the season,” Heupel said about that conversation with Hooker. “I think it’s important that you finish the season the right way and kids make an educated decision. I’ve said it before, I think publically with you guys, we want our players to have an opportunity at the next level. You want them to have a full career, you want them to make the right decision at the right time for them. So you get feedback from different people and present the information and help them make an educated decision.” 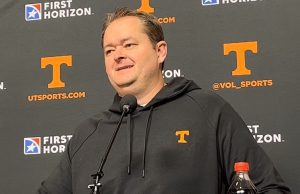 Tennessee HC Josh Heupel speaking to the media in Knoxville.

While he didn’t get into too much detail about Hooker, that is fairly expected. But the quote does give a good idea about the conversations that Heupel and his quarterback are having, or will be having, as the season winds down over the next month and a half.

Additionally, it shows the thought process that Heupel has with his entire team in general, and the process that he has when it does come to his players declaring for the NFL draft. For Heupel, it’s not about rushing the kids to the NFL as soon as they have a good season. That may be the case for some, but ultimately, it is about having the education behind the process, understanding what is best for the player and their family, and then moving forward from there.

According to Sports Illustrated’s recent NFL Draft quarterback rankings, Hooker lists as the 20th quarterback in the draft class. He is one spot above Georgia quarterback J.T. Daniels but is also behind Ole Miss’ Matt Corral (No. 2) and Auburn’s Bo Nix (No. 13) from the SEC.

Through his first ten games at Tennessee, Hooker has racked up 2,138 passing yards, 22 touchdowns, and has thrown only three interceptions. However, what makes Hooker so dynamic is the running ability that he has in his repertoire. From a rushing perspective, Hooker has 130 carries for a total of 465 yards and four touchdowns. Additionally, Hooker leads the team in rushing attempts and is only 60 yards behind Tennessee’s leading rusher Tiyon Evans (525).