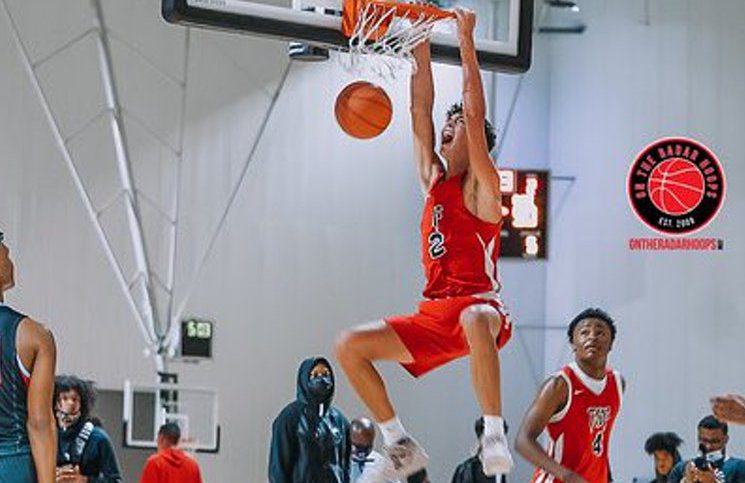 Phillips ranks as the nation’s 66th best prospect and the 10th best power forward in the 2023 class according to the 247sports composite rankings.

It was a busy weekend for Phillips. The power forward took in two big time environments, both on the gridiron and the hardwood.

“Their fans are something different. It was like a 17,000 attendance on a Sunday afternoon game. That was impressive to have than many people on a random Sunday afternoon.”

What stood out most to Phillips, wasn’t any atmosphere or facility that he saw. It was the relationship Rick Barnes has with his players.

“Coach Barnes loves his players,” Phillips said. “Like really, really loves his players. It’s impressive to see that relationship they all have together and with him. It’s pretty cool. You don’t usually see that at the college level.”

“He just seems like a genuine guy. Just one weekend being around those guys on the staff and coach Barnes. They just seem genuine people who aren’t going to try and lie their way around anything. It was really cool to be with them for really an entire weekend. They made me feel like I was a part of the team for a weekend.”

Phillips says he doesn’t have a lead recruiter at Tennessee but talks to everyone on staff. The prep power forward says he texts with someone on the Vols’ staff everyday and talks on the phone two or three times a week.

“Strengths, I feel like I’m a very versatile player,” Phillips said. “I can guard one through five and be really athletic and long. I also feel like my playmaking is a very good skill set. Passing the ball, moving the ball around and really trying to be an on the court coach.”

The Jacksonville, Alabama native says he’s working to improve his ball handling and perimeter shooting but there’s already a strong base there for a power forward. Phillips’ athleticism and size gives him versatility on the defensive end that Barnes loves.

When Phillips tunes his guard skills, the skillset to be an elite offensive player is there.

The four-star’s recruitment has already been an active one. Phillips has officially visited Tennessee and Georgia this fall while also unofficially visiting Alabama, Georgia Tech and Memphis.

With the early signing period still a full year away, Phillips is in no rush to make a decision, but plans on cutting his list down in the following months.

“I’m planning on cutting my list within the next couple months,” Phillips said. “I’m going to hopefully come off a state championship win with my team and then that would be perfect timing to cut my list, in my opinion.”

The Alabama native has offers from both his home state schools. With Tuscaloosa 131 miles away and Auburn 106 miles away it seems difficult to get Phillips out of the Yellowhammer State.

In fact, Phillips father — John David — played football at Alabama in the 90s. As did his grandfather and uncle. However, Phillips insisted that won’t be a deciding factor in his recruitment.

“My parents have always told me to be true to myself and who God made me to be,” Phillips said. “Whatever decision is best for me will be the decision I make. There’s no home field that I’m looking for or really valuing at the moment. Being closer to home, there’s none of that for me, it’s really about how I feel like I’d fit in best.”

Phillips is a rare Alabama resident that grew up casually rooting for both the Crimson Tide and Tigers. In fact, Phillips’ says his favorite college is his hometown Jacksonville State Gamecocks, where his mother works.