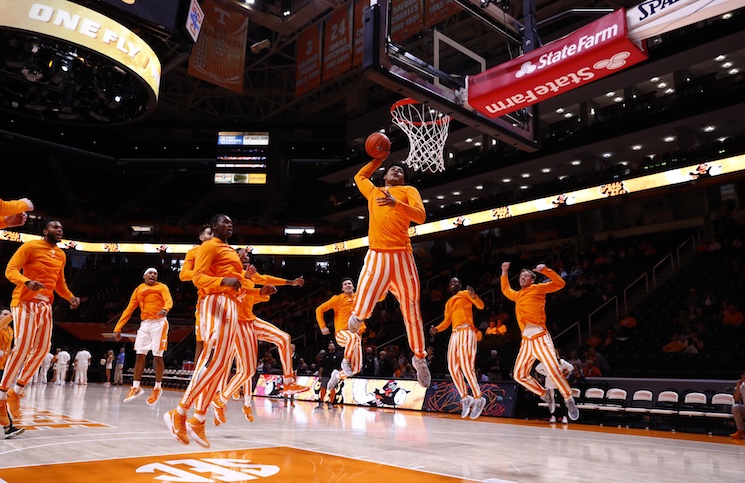 After a 2-0 start to the season, Tennessee basketball travels to Uncasville, Connecticut for the Hall of Fame Tip-Off.

The four-team field is loaded with Tennessee facing No. 5 Villanova in game one and either No. 6 Purdue or No. 18 North Carolina. The early season test will be a great litmus test for the new look Vols.

Here are four storylines to watch in the event.

Chandler has shown enough for me to believe he’s going to be a high level player in his one year in Knoxville. With two games against top 25 teams upcoming, the challenge was naturally going to be greater for Chandler and Tennessee.

But with Villanova and preseason Big East Player of the Year Collin Gillespie up next, Chandler’s skills and experience will be tested in a big way.

Wildcats’ point guard Collin Gillespie is a preseason First Team All American and is in his fifth season playing college basketball and his fourth starting at point guard.

Gillespie is averaging 17.3 points and 3.7 assists per game three games into the season including an 18 point, three assist performance against No. 2 UCLA.

If Tennessee is going to start out the Hall of Fame Tip-Off with a bang, earning its fifth top five win of the Rick Barnes’ era, Chandler has to hold his own against one of the country’s best guards.

It’ll be interesting to see whether Chandler matches up on Gillespie the whole game. Barnes is high on Chandler’s defensive potential, but has been critical of his play on that end of the floor so far this season.

Tennessee’s offensive strategy has seen a seismic shift so far this season. Barnes said the Vols took around 40 three-pointers in all of their scrimmages and exhibition games.

Through two games that trend has continued— though to a slightly lesser degree. Tennessee shot 40 triples in the season opener against UT-Martin before slowing down and shooting 23 against ETSU.

The results speak for themselves, Tennessee has made 42.8% of its three-pointers. That mark is good for 27th in the nation and only one team with a higher percentage is averaging more attempts a game (Furman). Points have followed with Tennessee tallying 92 a game two games into the season.

This, obviously, allows Tennessee to have more possessions but also to get better looks from three-point range.

“If we get offensive rebounds, unless we have a clean putback, we are definitely looking to spray it from three. We really are,” Barnes said following the season opener.

The question is obvious, can Tennessee continue to have success on the offensive glass against better competition. If they can consistently, this should be an elite offensive team.

Villanova has allowed only 25 offensive rebounds through three games, though 13 came against UCLA. Purdue has one of the biggest front courts in the country and North Carolina’s program has long prided itself on being dominant on the glass.

Tennessee isn’t going to average 21 offensive rebounds this weekend, but if they can continue to steal possessions at a high clip then they’ll set themselves up for success in Uncasville.

How Will Tennessee’s Defense Hold Up?

Barnes was not pleased with Tennessee’s defense in the season opener against UT-Martin and despite playing better on that end of the floor against ETSU it’s still a concern for the seventh year coach.

Tennessee’s defense was always going to be a question this season with the players it lost — Yves Pons, Jaden Springer and Keon Johnson — and the number of newcomers on the roster.

The question is how good can they get and how quickly can they do it.

That group faces a major test this weekend, especially in game one against Villanova. Jay Wright and the Wildcats have one of the best offenses in basketball year in and year out.

Villanova will put pressure on Tennessee’s perimeter defense and with the Vols’ lack of rim protection, they have to play sound on ball defense and without breakdowns once the Wildcats get the defense moving.

According to KenPom, Villanova has the nation’s third best adjusted offensive efficiency. Purdue has the second best and North Carolina has the 17th best.

Tennessee’ defense is going to get tested at an extremely high level this weekend. If the Vols struggle on that end it wouldn’t be surprising. If they can hold up in the loaded field that bodes really well for this talented group.

Barnes and his staff bet on Olivier Nkamhoua this offseason. Through two games, Nkamhoua has made them look very foolish for a half and like geniuses for three halves.

The junior power forward impressed in preseason practice and then played his best game in a Tennessee uniform against ETSU, tallying 23 points and eight rebounds in the win.

The physical talent has always been there for Nkamhoua, but the game seems to have slowed down for him and he claims he’s moving on play-to-play much better than in the past.

What can Tennessee expect out of Nkamhoua against two quality opponents?

Offensively, I don’t expect Tennessee to run much action through the power forward, but the Vols’ need him to finish the easy ones he gets around the basket and to continue his early season success from three-point range.

Nkamhoua has knocked down three-of-five attempts from beyond the arc this season after making just one-of-five triples his first two seasons.

More important than what Nkamhoua does on offense is what he does on defense and on the glass. With Yves Pons gone, Tennessee’s interior defense is much worse than it was the past three seasons. The Vols need Nkamhoua to hold his own on the block without getting into foul trouble.

Nkamhoua has been elite on the glass this season, totaling 22 rebounds in two games. Can the 6-foot-8 power forward continue to be a really good rebounder against bigger and better frontcourts?

We’ll figure out this weekend.