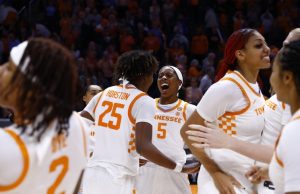 The Tennessee Lady Vols celebrating a big-time win over No. 12 Texas on Sunday. Photo via Tennessee Athletics.

It didn’t come easy, but after four quarters and an extra five minutes of overtime, the Tennessee Lady Vols found their second straight Top 25 win.

The Lady Vols played a gritty, gutsy game on Sunday afternoon in Thompson-Boling Arena, relying on their stars, who did show out.

The sixteenth-ranked Lady Volunteers took down twelfth-ranked Texas in overtime by a score of 74-70. After taking down No. 23 South Florida last week, the Lady Vols now have two marquee Top 25 wins in their first four games of the season.

The first half of the game was a constant back and forth affair, with neither team able to jump out to a substantial lead. After Jordan Horston’s 10 consecutive points to end the quarter, the Lady Vols went into halftime leading by one. However, it was Texas that came out swinging in the third quarter, holding onto a 10-point lead by the start of the fourth.

When the fourth quarter began, something clicked for Tennessee. Not only the team, but the crowd came alive as well. Over the course of the next ten minutes in the final quarter, Tennessee outscored Texas 20 to 10 to force overtime.

Behind the roar of the Tennessee crowd, the Lady Vols outscored Texas 15 to 11 during overtime, securing a massive win at home.

Tennessee guard Jordan Horston was electric on Sunday. Horston had 28 points, which was a game-high, and even brought in 15 total rebounds to wrap up the double-double.

But while a double-double was impressive already, Horston’s teammate, Tamari Key, did something that has never been done before.

“Right now, Tamari is playing with a toughness that’s just different,” Tennessee head coach Kellie Harper said after the game. “We talk about toughness, and it’s not always about physicality. Toughness is making the right play mentality.”

Tennessee guards Jordan Walker and Alexus Dye also had big games for the Lady Vols, scoring 13 points each. Walker threw in five assists to go along with her points, while Dye also hauled in six total rebounds, three on the offensive end of the court.

The Lady Vols (4-0) will take on Kansas this upcoming Friday night in Las Vegas.