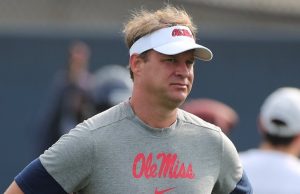 Whenever there is noise about a marquee coaching search in the college football landscape, Lane Kiffin’s name is often in the mix.

And now, with the end of the season rapidly approaching, it looks like that theory is proving to be true once again.

Just one day after Dan Mullen was fired as the Florida Gators head coach, Kiffin’s name is already being tossed into the mix. Multiple reputable sources such as ESPN, CBS Sports, and Sports Illustrated have already labeled as a potential candidate to take over in Gainesville.

“He hasn’t won like Spurrier but might be the closest thing to the former Florida coach in terms of entertaining offense, quarterback development, and incredible quotes,” ESPN’s Adam Rittenberg wrote on Sunday.

Kiffin, the head coach of Ole Miss, is currently in his second SEC head coaching job after spending one year at Tennessee in 2009. However, even more than a decade after his departure from Knoxville, many are left wondering if Kiffin’s track record leaves him open to taking the Florida job. Ole Miss is currently in the midst of a 9-2 season under Kiffin, who has a two-year record of 14-7 with the Rebels.

“It remains to be seen how long the Lane Train is going to stay in Oxford,” wrote SI’s Richard Johnson on Sunday after the Mullen news had broke. “Yes, Kiffin reportedly still has that house in Boca Raton so you’d like to draw a Florida or a Miami connection (although the Canes job still is not open) there then there you have it.”

Ultimately, though, the Florida job isn’t even the first job that Kiffin’s name has been linked to in this coaching search season. Kiffin’s name has come up in conversations around the jobs at Florida, LSU, Miami, and even USC, his former team after leaving Tennessee.

Although it was a long time ago, there was an infamous incident between the then-Tennessee head coach and Florida. While speaking to a group of donors in Knoxville in February of 2009, Kiffin openly accused Florida and previous Gators’ head coach Urban Meyer of cheating.

“I’m going to turn Florida in right here in front of you,” Kiffin said to the group, according to Bleacher Report. “As Nu’Keese [Richardson] was here on campus, his phone keeps ringing. And so one of our coaches is sitting in a meeting with him and he says, ‘Who’s that?’ and he looks at the phone and it says ‘Urban Meyer.’ Just so you know, when a recruit’s on another campus, you can’t call a recruit on another campus. I love the fact that Urban Meyer had to cheat and still didn’t get him.”

In the end, Meyer was not cheating, and there was no rule in place about calling a recruit while on a visit.

While it does feel unlikely that Kiffin will bolt to Florida, it would certainly rattle an earthquake throughout the SEC – and college football in general, for that matter.