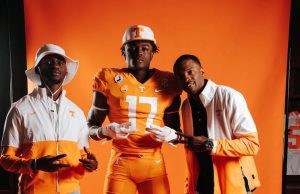 With plenty of offensive talent on their way to Knoxville in the next recruiting class, Tennessee has been needing more big-time recruits on the defensive side too. And on Monday, that wish came true for head coach Josh Heupel and his staff.

Joshua Josephs, a four-star edge rusher from Kennesaw, GA, has officially announced his commitment to Tennessee.

Josephs is a versatile defensive player who has the speed, strength, and power that it takes to rush the quarterback. Not only that, but Josephs can also drop into coverage, too. His ability to perform in different ways on the football field will be a welcome addition to the Tennessee defense.

“A twitched-up front-seven defender that has a chance to be a difference-maker on Saturdays,” said Andrew Ivens, a southeast recruiting analyst for 247. “Looks the part with a 6-foot-3, 215-pound frame and a verified 82-inch wingspan. Has been utilized in a variety of different ways at the prep level having rushed the quarterback from both a two and three-point stance. Has also been deployed as more of a traditional linebacker in certain situations.”

Josephs announced the news via his Twitter on Monday night.

During his recruitment, Joseph has collected 27 total scholarship offers and took three official visits during the summer and fall months. Josephs visited Michigan and Penn State back in June, and then took an official visit to Tennessee on Oct. 9, during the weekend of the South Carolina game.

Also of note, Josephs did take an unofficial visit to Kentucky on the weekend of No. 6. That weekend just so happened to be the game in which Tennessee upset the Wildcats in Lexington.

At the end of the day, this is the exact type of recruit that Tennessee was looking to land as this football season wraps up. Defensive coordinator Tim Banks has done a terrific job leading the Vols’ defense in his first year, but it has been clear to see that Tennessee needs more skilled players on defense and just more bodies on the roster in general.

Josephs will fit that role nicely, and already has traits that will be beneficial to Tennessee from the jump.

Out of the 14 total players that have committed to Tennessee in the 2022 class, Josephs is now the fourth defensive player on the list.

With the addition of four-star edge rusher Joshua Josephs, the Tennessee recruiting class now moves up to No. 27 nationally, and No. 9 in the SEC.