Auburn head coach Bruce Pearl had an interesting comment when speaking about Tennessee on Thursday. In light of the Vols and Tigers’ upcoming game in Knoxville this Saturday, Pearl went back in the memory bank to find a comparison for his familiar opponent.

While speaking to the media, Pearl compared the current Tennessee basketball team to the Vols’ Sweet Sixteen team back in the 2018-2019 season.

“That 2019 [Tennessee] team was one of my favorite teams from the standpoint of having great respect for an opponent,” Pearl said on Thursday. “This team here is, I think, is equally as good. The difference is this year’s team is actually better defensively. They turn you over, they steal the ball from you, they put a lot of pressure on you, they fly around. This is one of Rick’s (Coach Rick Barnes) better defensive teams and they’ll probably make it pretty difficult for you to run your stuff with steals and turnovers and forcing you to play a little faster. Holding the score down.”

The 2018-2019 Tennessee team was a special one in Knoxville, achieving the No. 1 ranking in the country for four weeks during a late stretch in the year. Heartbreak did come for those Vols, though, as they lost to Pearl’s Auburn team in the SEC Tournament championship, 84-64. Then, in the NCAA Tournament, Tennessee began March Madness with two straight wins over Colgate and Iowa. However, in the Sweet Sixteen, the Vols would eventually lose to Purdue in overtime to close down Tennessee’s season. The Vols were led by Grant Williams, Admiral Schofield, and Jordan Bone among others.

“I sort of go back to 2019 when Tennessee was right there as one of the very best teams in the country,” Pearl said on Thursday. “I felt like us (Auburn), Tennessee, and Kentucky, the year we got to the Final Four, were three teams that could have all gotten to the Final Four. They put Kentucky and us in the same region and Tennessee lost a heartbreaker to, I think, Purdue. And then I think Virginia upset Purdue if I’m right. So we’ve seen Final Four caliber Tennessee teams before and this is certainly I think one of them.”

So, how much truth is there to what Pearl is saying here? Without the conclusion of the current season, it’s impossible to tell whether the end result will be better or worse than the Sweet Sixteen overtime loss. However, there are some interesting season statistics to compare. 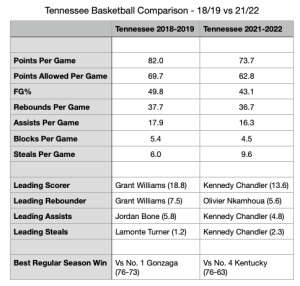 See Also from RTI: Bruce Pearl Comments on the Difficulty of Playing at Tennessee

Judging by the table above, the 2018 Tennessee team was far superior on the offensive end of the court led by Grant Williams. That Vol team was averaging just under 10 points more per game, while shooting almost 50 percent from the field by the season’s end. That Tennessee team was so good at efficient shooting, especially at or near the rim. One area where both teams have excelled, though, is in assists. However, Bruce Pearl does have a good point about this current Tennessee team being better and peskier on the defensive end.

The current Vols are giving up about seven points less per game on average than the 2018 Vols and are creating more turnovers on the defensive end.

Additionally, both teams were able to take down a Top 5 opponent in front of the home crowd in Knoxville.

So, if both teams squared off, who would win? The easy answer here, without even trying, is saying that Tennessee’s 2018 team would beat the current team if the circumstances were current and Olivier Nkamhoua was unable to play. While the Vols have had great minutes from Brandon Huntley-Hatfield and Jonas Aidoo in the last few games, it’s hard not to imagine Tennessee would need this version of Nkamhoua to win.

But, if the teams are going head-to-head at full strength, I still have to give the advantage to Tennessee’s 2018 team. Kennedy Chandler, Zakai Zeigler, Lamonte Turner, and Jordan Bone would make for some unbelievable matchups on the ball, but the Vols’ former bigs just have too much strength, size, smarts, and scoring ability down low. While Tennessee’s defense did do a good job at neutralizing Kentucky’s bigs in Knoxville, the combination of Williams, Schofield, and Kyle Alexander feels like it would be a big advantage in the favor of the Vols’ Sweet Sixteen squad.

I have the 2018 Vols winning six of ten hypothetical matchups if you will.

“I’m just glad that these games matter,” Pearl said on Thursday. “Because there was a time where I was in Tennessee, the Auburn game typically didn’t mean as much. Now, I’ll give you one exception. That was in Tampa, the last time the SEC Tournament was there. Auburn upset Florida and we played an Auburn team in the Saturday game in the semi-final. So it’s just great to see for both Tennessee and Auburn, two places I coached, are able to play in big games.”

No. 17 Tennessee will host No. 3 Auburn and Bruce Pearl this Saturday in Knoxville at 4:00 p.m. ET on ESPN.