The generosity of the Tennessee athletics department continues to be shown. On Thursday afternoon, a group of Tennessee football players and representatives took a quick trip over to the East Tennessee Children’s Hospital to hang out with the kids for a little while.

While visiting the children’s hospital, the three Tennessee Vols did participate in a little bit of traditional and freestyle dancing. In the first video below, the players, along with the kids and members of the hospital staff, all danced around to a classic – The Hokey Pokey.

UT Football players Hendon Hooker, Titus Rohrer and Jacob Warren do the Hokey Pokey with some of our patients and staff at East Tennessee Children’s Hospital. Cause that’s what it’s all about! #GoVols #VFL #WeGetKids pic.twitter.com/dA2a3hHTpd

While the group wasn’t on the floor dancing, the players spent time talking to the kids, giving autographs, and taking pictures. 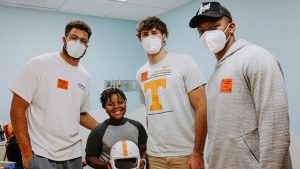 The player’s trip to the East Tennessee Children’s Hospital on Thursday was just one event in a list of philanthropic events for Tennessee Athletics this week.

So grateful for my friend Gabe and his pure heart, knowing that every little bit can help. Thanks for donating to my LLS campaign Gabe and for encouraging others to do the same (even your sister 😉)! See my pinned tweet for the link to donate. Let’s #beatbloodcancer pic.twitter.com/TBCmQ8rkRR

Then, later in the week, Tennessee football head coach Josh Heupel and Tennessee baseball coach Tony Vitello got in on the charitable action.

On Thursday, both Vitello and Heupel helped UTK’s Sigma Alpha Epsilon fraternity raise money for the Wounded Warrior Project. Heupel, a former national championship-winning quarterback at Oklahoma, delivered a strike to drop a student in the cold water of the dunk tank. In addition, Vitello was giving out two-dollar “Chest Bumps for Charity” while still serving his four-game suspension from last weekend.

Thanks for coming out coach! The Southpaw still got it!

Vol Nation, here is the link to donate to the Wounded Warrior Foundation: https://t.co/tVtkgtG7OU pic.twitter.com/zI6tbc3P2E

Coach Vitello even let me get a chest bump pic.twitter.com/baMvHD8W5m

Thank you @UTKnoxville and @Vol_Baseball head coach Tony Vitello for supporting @wwp and our veterans in such a unique way. https://t.co/MgTDBPhNBJ