Despite facing one of the best pitchers in the SEC, Tennessee’s offense exploded in its, 9-2, win over Georgia Friday night at Lindsey Nelson Stadium.

Tennessee’s win clinches its third straight series victory over its SEC East rival and clinches a share of the SEC regular-season championship.

Here’s everything you need to know about the Vols’ game two win over Georgia.

Blade Tidwell has looked sharper than he did in his four inning start Friday night against Georgia.

However, Tidwell worked through his imperfect outing to get Tennessee to the middle of the game with the lead.

Georgia took the lead two at-bats into the game via Cole Tate’s solo homer. From there, the sophomore flirted with danger but kept the Bulldogs off the scoreboard.

Georgia had a baserunner in each of Tidwell’s four inning pitched and a total of seven baserunners in the outing.

“Progress, for sure,” Tennessee head coach Tony Vitello said of Tidwell’s outing. “I think when you’re in the heat of the moment and you’re knowing who he is, I think (he) kind of recognize a problem he’s had too and us — you’re not going to roll in this thing and start dominating people. Ask their (Georgia) guy and that’s with all due respect. Both guys should pitch in the big leagues, in my opinion, for quite some time. … We’re not looking for domination and we’re not looking for strikeouts and I think at times he’s been guilty of that and we have too. But progress.”

The sophomore wasn’t his best, including offering a trio of free passes, but he fought through it and kept Georgia off the scoreboard following the first inning home run.

That proved important as Georgia ace Jonathan Cannon was in a groove for the first three innings. Tennessee did some damage to the senior in the fourth inning, allowing Tidwell to exit the game with the lead.

Georgia RHP Jonathan Cannon is one of the best pitchers in the SEC and the Bulldogs have been nearly unbeatable with the senior on the mound this season.

Cannon lived up to that billing early, keeping Tennessee off the scoreboard the first one-and-a-half times through the lineup.

Jorel Ortega’s one-out double got the Vols on the board in the fourth inning and Cannon’s outing spiraled afterwards.

Evan Russell gave Tennessee a 3-1 lead with a two-out, two-run homer onto the second deck of the left field porch. Cannon got out of the fourth inning before getting quickly run in the fifth inning.

Luc Lipcius led off the inning with a towering home run and Cannon’s day ended when Jorel Ortega dropped an RBI single into center field.

“We didn’t make it easy for him,” Vitello said. “I’d like to think he would agree for that. If you let a big train like that get rolling you may not slow it down, so I think it was important for us to get out of some jams like we talked about Tidwell making some progress to get out of some jams on the defensive end and then on the offensive end to have production. Maybe not on the scoreboard but have production that led later to scoreboard production.”

The six earned runs ties the most the tall right-hander has given up in an outing this season and it came in 1.2 less innings pitched. Cannon’s Friday outing also marks the first time he hasn’t made it out of the fourth inning this season.

Have A Night Jorel Ortega

Jorel Ortega didn’t have a game changing home run or remarkable highlight, but the redshirt-sophomore was as consistent and effective as can be Friday night.

Ortega went three-of-five at the plate, driving in runs in his three straight at-bats for a total of three RBIs on the evening.

The second baseman opened Tennessee’s scoring with a double in the fourth inning before recording RBI singles in the fifth and sixth inning.

The Puerto Rico native continues to be extremely effective with two strikes, recording two of his hits with a pair of strikes.

Don’t let Tennessee catch Evan Russell hit a home run. It might not be his last.

That proved true in the Vols’ series clinching win as the super-senior hit the previously mentioned go-ahead home run in the fourth inning as well as a solo homer in the seventh.

It marked the third multi homer game of Russell’s season and the sixth of his career — all coming in the last two seasons.

“Baseball is just a confidence game,” Russell said. “If it’s going well early in the game, as long as you stay out of your own way, or for me especially, if I stay out of my own way good things will tend to come later throughout the game. If my swing is usually feeling good, my approach is sort of to the middle of the field, I can sort of get some momentum going and get some multi home run games.”

Perhaps most impressively, all six of Russell’s multi home run games have come against SEC opponents. 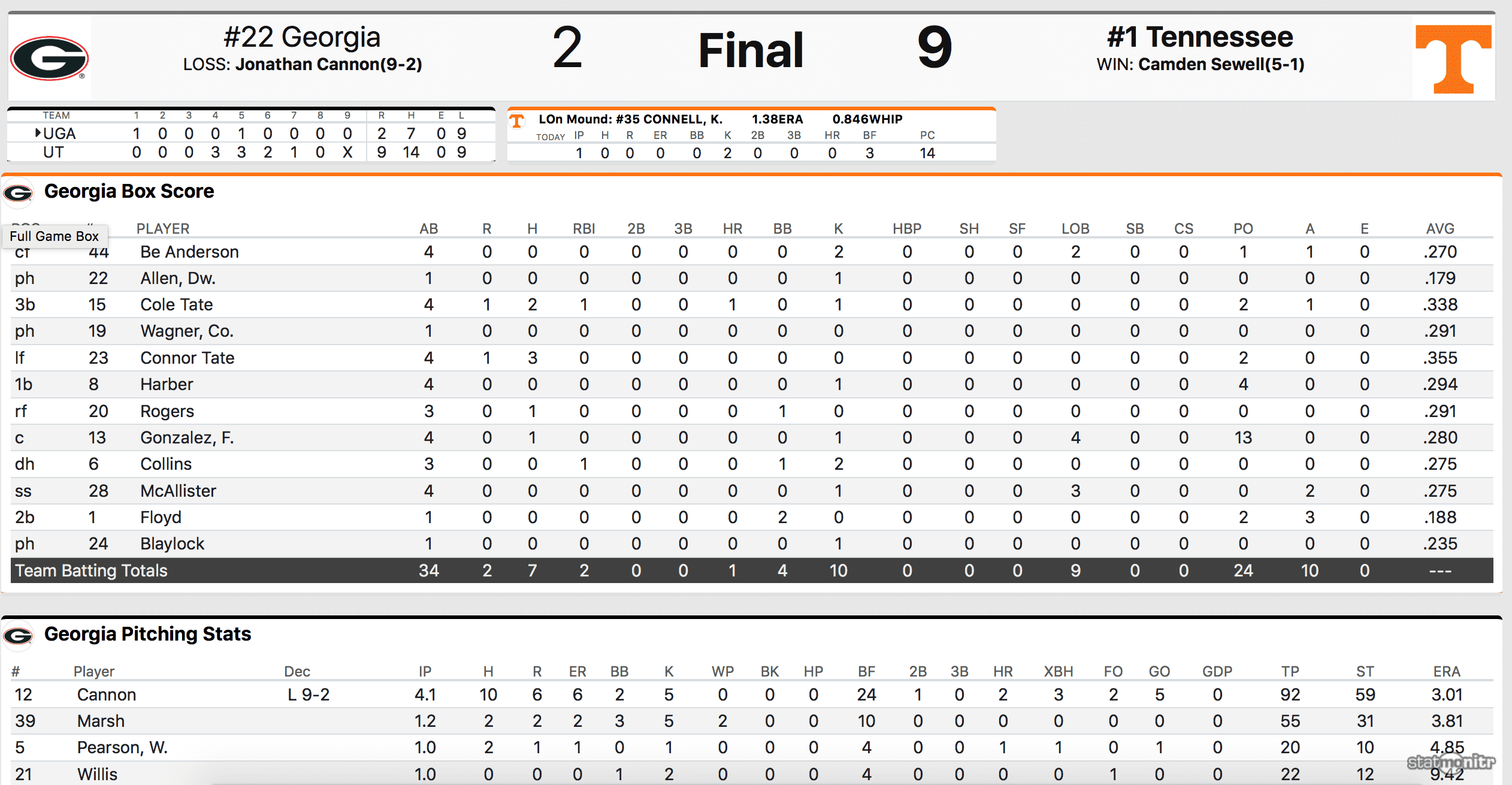 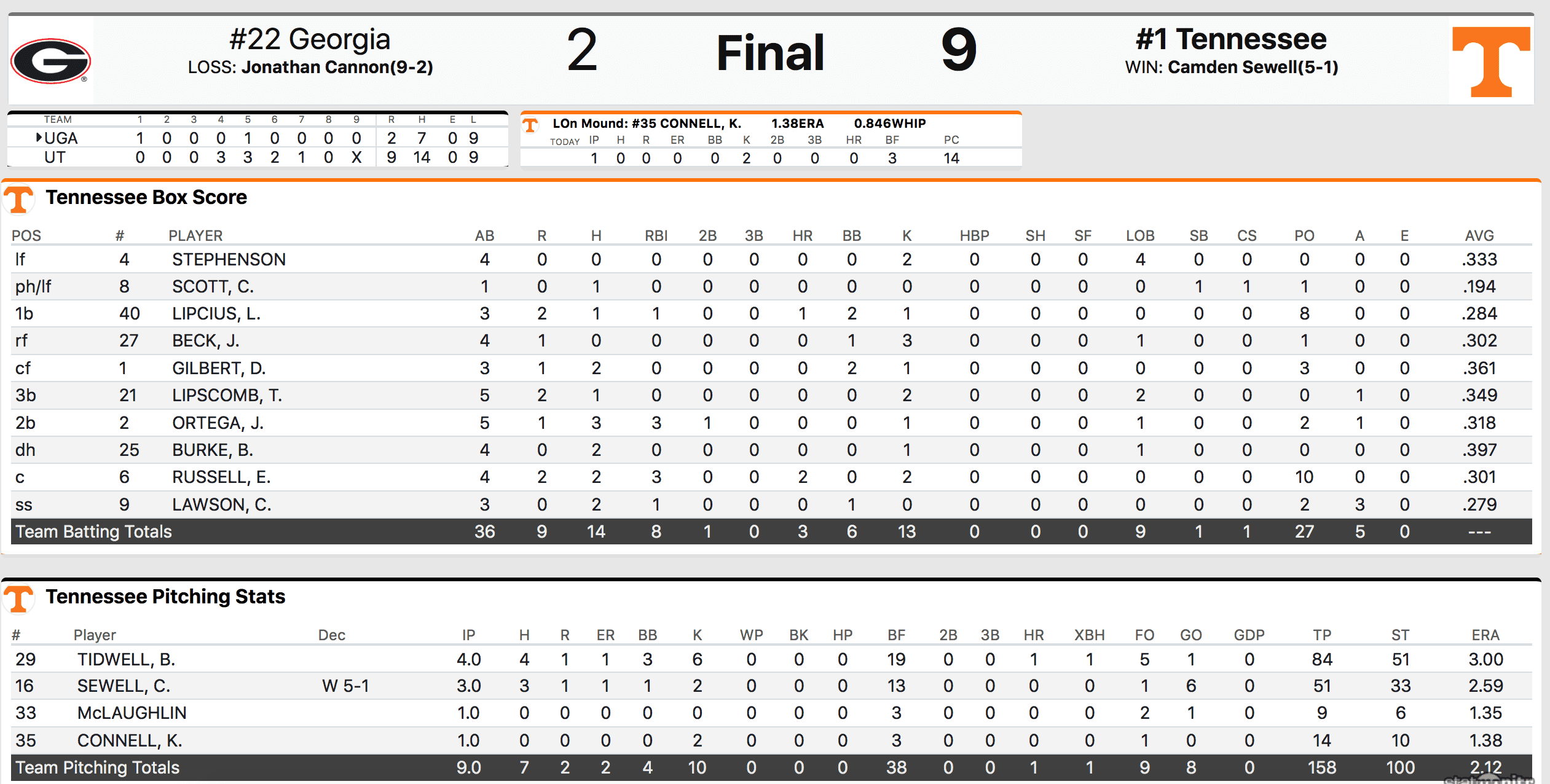 Tennessee and Georgia conclude their weekend series Saturday afternoon at 1 p.m. ET. The game will be streamed on SEC Network+.

“I think we’re back to as coach V likes to say ‘kill mode.’” Luc Lipcius said. “We kind of lost that last weekend, circumstances or whatever, we didn’t come ready to play. This weekend, we all knew that Georgia was going to be a really good team and we had to show up and we are showing up. We still have one more tomorrow that I think we’re all going to be ready for and giving our all.”