Power hitting is coming to Knoxville in abundance and combining it with the hitter friendly Lindsey Nelson Stadium should make for entertaining baseball.

Here’s everything you need to know about the Yellow Jackets, Fighting Camels and Hornets ahead of a weekend of postseason baseball.

Georgia Tech lands as the No. 2 seed in the Knoxville Regional after posting a 34-22 (16-16 ACC) record this season. The Yellow Jackets were solid in the pre conference slate, winning two-out-of-three over Georgia, but dropping midweek bouts to instate foes Georgia Southern and Mercer.

After the Tigers swept Georgia Tech the second to last weekend of the regular season, the Yellow Jackets swept Pitt before splitting games with the Panthers and Louisville in the pool play portion of the ACC Tournament.

Georgia Tech’s lineup is a dangerous one that brings series power hitting to the smaller Lindsey Nelson Stadium. The Yellow Jackets rank eighth in the country with 110 home runs and fifth in the nation in slugging percentage.

While Georgia Tech’s power hitting pops off the stat sheet, the Yellow Jackets contact hitting is even better, ranking second nationally with a .328 batting average.

Georgia Tech brings two of the best players in the country to the Knoxville Regional. Catcher Kevin Parada is a projected top 15 pick in the MLB Draft, hitting .356 with 26 home runs and 85 RBI.

Middle infielder Chandler Simpson has been fantastic since transferring from UAB, posting a .418 batting average — the nation’s best — while stealing 23 bases.

It’s hard to imagine how Georgia Tech finished .500 in the ACC and isn’t a regional host after reading about its dominant offense. But if you look at Georgia Tech’s pitching staff you wonder how they even made the postseason.

The Yellow Jackets’ pitching staff boasts a 6.55 ERA that ranks 13th in the ACC. There’s not a single Georgia Tech pitcher that has pitched more than 20 innings and has an ERA less than five.

All four of Georgia Tech’s pitchers with five or more starts this season have ERA north of 5.40 and average under 4.1 innings pitched per outing.

Campbell went 8-7 in those games and went 3-2 against Old Dominion, Liberty and UNC Greensboro — three strong programs that made the NCAA Tournament.

The Fighting Camels come into the NCAA Tournament red-hot, winners of 16 of their last 19 games.

Campbell brings a strong offense to Knoxville that can beat you with its contact and power hitting. The Fighting Camels rank 41st nationally with a .298 batting average while also boasting six batters with double-digit home runs.

Drake Pearson leads the way for a very balanced Campbell lineup, hitting .341 with 18 home runs and 59 RBI. Six different Fighting Camels have between 45 and 59 RBI and seven starters are hitting over .280.

Campbell is dangerous on the base paths, ranking eighth nationally with 125 stolen bases.

The Fighting Camels have a true ace in RHP Thomas Harrington. The sophomore has been fantastic in 14 starts this season, posting a 11-2 record and 2.21 ERA.

Behind Harrington, Campbell’s pitching staff is rather pedestrian though I wouldn’t call it a true weakness. Depth is a major concern with only seven Fighting Camels pitching over 20 innings this season.

Campbell leans on its top two pitchers — Harrington and Cade Kuehler — with both throwing over 77 innings this season.

The Fighting Camels have struggled giving out free passes this season, ranking 166th nationally in walks per nine innings.

Unlike Campbell, the Hornets haven’t played many power five opponents this season. Alabama State played three games against Auburn and Alabama, going 0-3 while being outscored, 28-14.

The Hornets won eight of their 10 regular season conference series.

Four Alabama State bats enter the weekend hitting over .300 on the season and the Hornets’ .291 batting average ranks 69th nationally.

Designated hitter Corey King leads the way for Alabama State’s offense and brings power hitting. King is hitting .367 with 16 doubles, 14 home runs and 64 RBIs. Hunter May doesn’t have the power that a number of players in this week’s tournament do, but the junior catcher has 21 doubles and eight home runs on the season.

Alabama State is not a superb power hitting team but does have 12 players with home runs this season. The Hornets also rank 19th nationally in base on balls.

Alabama State’s strength of schedule is perhaps its biggest weakness behind its talent deficit entering this weekend. Not only have the Hornets played just three games against power five opponents, they haven’t seen an environment comparable to postseason Lindsey Nelson Stadium.

The Hornets’ pitching staff leaves something to be desired, ranking 97th nationally with a team ERA north of five. While the ranking is above average nationally it isn’t impressive compared to its lackluster schedule.

Walking opponents is a bigger problem for Alabama State than it is for Campbel. The Hornets rank 208th nationally with just under five walks per nine innings pitched. 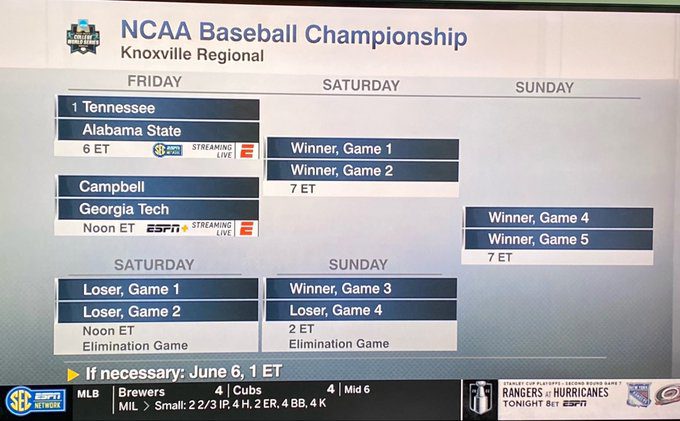