Tennessee and Tony Vitello are thinking about the future. Way into the future, it would seem.

On Wednesday afternoon, Tennessee received a commitment from class of 2026 infielder Colten “Colt” Springall. The rising high school freshman announced his commitment to Tennessee through a very well-produced video on his social media.

“Blessings don’t flow to you, they flow through you,” Springall said in his tweet. “With my ANNOUNCEMENT and COMMITMENT to the University of Tennessee.”

Blessings don’t flow to you, they flow through you… With my ANNOUNCEMENT and COMMITMENT to the University of Tennessee pic.twitter.com/eziRYM5zH1

Springall’s video features several staple moments from the history of Tennessee athletics. With narration over top pulled from Tennessee legend and motivational speaker Inky Johnson, the video shows clips of Tony Vitello winning the SEC Championship in 2022, a clip of Peyton Manning from 1997, Neyland Stadium’s environment against Oklahoma in 2015, and of course, Drew Gilbert’s walk-off grand slam against Wright State in the 2021 Knoxville Regionals.

In addition, some major names from the sports world were in the comment section of Springall’s video on Instagram. Phillies outfielder Bryce Harper, NASCAR driver Austin Dillon and his wife Whitney, and even Inky Johnson himself all stopped in to say congratulations. 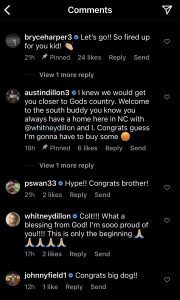 The six-foot, 150-pound infielder has experience playing shortstop but is most often designated as a second baseman and third baseman. Springall is said to be an aggressive infielder with the ability to attack ground balls and make accurate throws across the diamond.

In addition, Springall is also a quality left-handed hitter.

“Utilizes an even stance with a small leg kick timing mechanism,” the Perfect Game scouting report on Springall states. “Shifts weight onto the backside well. Quick hands produce good bat speed through the zone. Looks to do damage in the box. Lofted path allows balls to be driven in the air with authority. Has advanced feel for the barrel. More power should come as the frame continues to add strength.”

The report also states that Springall is an “excellent student”.

The Las Vegas, Nevada native is attending Bishop Gorman High School, which is the same school that Tennessee WR Cedric Tillman graduated from. Additionally, back in June, Tennessee football received a commitment from three-star running back Will Stallings from Bishop Gorman.

Springall visited the Tennessee baseball program in Aug. 2021 and posted several pictures of his time in Knoxville to his Instagram account.

The video below was posted to YouTube in June of 2021.