One of the most notable aspects of Tennessee’s 2022 roster compared to the 2021 roster is the depth in the secondary. While that’s something that has certainly been mentioned by Rocky Top Insider on various occasions so far this fall, it is nonetheless true.

With the influx in bodies to participate in defensive back activities during training camp, Tennessee defensive backs coach Willie Martinez hasn’t necessarily been worried about the order of the players during the drill. Yes, Tennessee has returning starters such as Trevon Flowers and Jaylen McCollough. However, at the same time, Tennessee has a lot more tools in the toolbox that have the ability to get in-game playing experience this year. Many of them just lack the reps in the Tennessee system.

So for Martinez, in this training camp, getting his players quality reps has been more important than the order in which the plays actually do the drill.

“We have been doing a good job of rotating,” Martinez said earlier this week. “We want to find out about a lot of guys that we don’t know about, guys that were not with us in the spring, whether that is Kamal (Hadden) or (Warren) Burrell or (De’Shawn) Rucker or (Brandon) Turnage. We knew that they would be in rotations, so we have been rotating. There are not really ones or twos. We are just trying to get them competitive reps in practice and trying to get the matchups that we would like so we can get an evaluation of each player. It has been good because we have been able to play a lot of guys.” 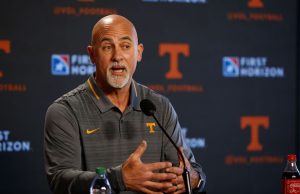 As mentioned before, Tennessee would like to have more guys in the in-game rotation this year at the defensive back position. Tennessee and Martinez are training the players to know each of the secondary positions for better knowledge, understanding, and flexibility. While that doesn’t mean that each guy is going to play multiple positions in the secondary, it does mean that each will be better equipped with an understanding of what is happening around them.

In order to get that experience, though, it just takes reps. That’s what will get these players up to the speed that they need to in order to see quality minutes.

“We really want to play more guys [in-game],” Martinez said. “We are trying to force ourselves in pushing the guys and obviously myself as a coach to continue to pour in as much as I can to make sure they understand what we’re doing in our scheme. They got to prove it on the field. Ideally, we would like to play at least three to four corners, three to four safeties. If anything, it would be five. If you can get that four to five in those positions and obviously STAR is in there. I would say if we could do that it would give us a chance in this league. Obviously, if somebody gets hurt then somebody could just bounce back in there and it’s next man mentality and they are ready to play.”

Tennessee Football will host Ball State in the season-opening game on Sept. 1 at 7:00 p.m. ET in Neyland Stadium. The SEC Network will have the broadcast.