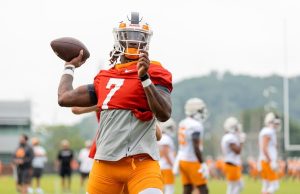 With Tennessee just over a week from opening the season against Ball State on Sept. 1, the Vols are currently going through a simulated traditional game week.

Tennessee will open the season on a Thursday night, which means that the Vols won’t be going through a traditional game week until week three of the season.

“From a game plan perspective, the way that we structured it this week is this week is a mock game week for us,” Tennessee offensive coordinator Alex Golesh said on Tuesday. “So we’re treating today (Tuesday) as a normal Tuesday, tomorrow is a normal Wednesday. We’re game planning as if we are on a short week – or, on a normal week I should say – and then we’ll repeat it, starting Sunday.”

The Vols will be on a shifted schedule in week one due to the Thursday night game, which immediately rolls into an extended week with the extra days until the next Saturday game against Pittsburgh. So, realistically, Tennessee won’t have a traditional Sunday to Friday game week until halfway into September.

Tennessee has been about speed since the first day the coaching staff was assembled, and that translates into all aspects of the team – including game week. Golesh said on Tuesday that just giving the newcomers the ability to understand the tempo of the week will be beneficial in the long run.

“Today – normal down and distance, tomorrow – tight zone and third downs, and then Thursday/Friday will be our normal Thursday/Friday prep going into game week,” Golesh said. “And then we’ll repeat it again next week. So we’re treating it like a normal game week. I think for the guys, especially guys that weren’t with us a year ago, it gives them an idea of how fast it goes. Morning practice team, Tuesday gets on you really, really fast, both as a coach and a player. So for us, it’s good to go through a normal game week. We’re here early, we’re staying late, we’re doing our normal Sunday through Friday deal. And then we’ll repeat it next week.”

Golesh knows that with everything going on in camp, though, some things can fall off the radar more than others. So his plan, for himself and the coaching staff, is to work harder by working smarter.

“My only point to our staff was let’s only put in what we know for sure we’re going to want to do,” Golesh said about the simulated week. “I think inherently when you have more time, it’s like a bye week, you put in a bunch and then take stuff out. And I’ve always thought that was backward but I’ve also been guilty of doing the same thing. So really a base game plan.”

Tennessee will open the season against Ball State on Thursday, Sept. 1 at 7:00 p.m. ET from Neyland Stadium. The SEC Network will have the broadcast on television.