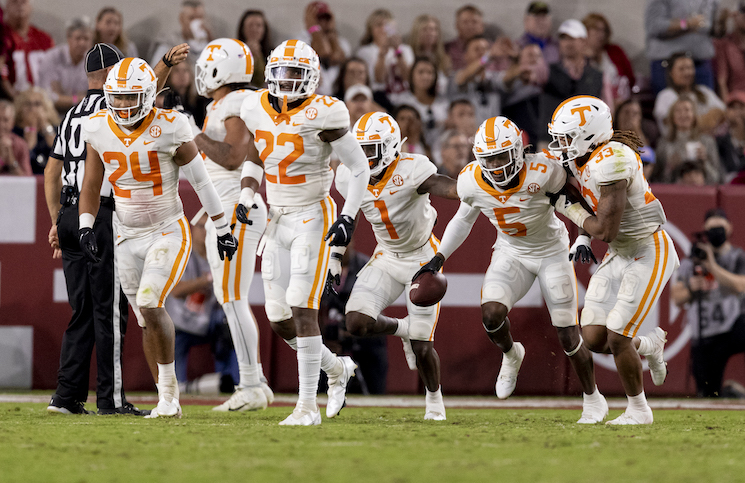 Game week is here and with it comes Tennessee’s inaugural depth chart for the 2022 season.

There is, however, seven co-starters where Tennessee isn’t making it known who will start at certain positions. There are eight more “ors” on Tennessee’s depth chart amongst back ups and who would play if a starter went down.

There were no surprises in the backfield where Hendon Hooker is the starting quarterback. Jabari Small will flank Hooker on the first snap of the game while Jaylen Wright is the back up and freshmen Justin Williams-Thomas “or” Dylan Sampson will be the third string.

Everything was as expected on the offensive line where Gerald Mincey “or” Jeremiah Crawford will start at left tackle alongside Jerome Carvin, Cooper Mays, Javontez Spraggins and Darnell Wright. Josh Heupel says that no matter who starts Mincey and Crawford will both play in the season opener.

At receiver, Cedric Tillman and Jalin Hyatt are definitive starters while either Bru McCoy “or” Walker Merrill will start opposite of Tillman.

As far as back up receivers, Jimmy Calloway or freshman Squirrel White is behind Hyatt while Ramel Keyton or Jimmy Calloway are behind Cedric Tillman.

More From RTI: Five Players Who Will Decide The Success Of 2022 Season

Roman Harrison is Young’s back up at LEO while either Elijah Simmons “or” Da’Jon Terry will back up Thomas. La’Trell Bumphus “or” Dominic Bailey will back up Tyler Baron at defensive end.

Jeremy Banks is Tennessee’s starting WILL linebacker with Solon Page III as his backup. Former Texas linebacker Juwan Mitchell “or” returning starter Aaron Beasley will start for the Vols at the MIKE linebacker spot.

Returning starter Warren Burrell is listed as a starting cornerback with junior college transfer Dee Williams listed as his back up.

On the other side, either Christian Charles “or” Kamal Hadden will start at corner.

Charles ability to become a co-starter while being limited for much of fall camp is an impressive feat and bodes well for the sophomore’s future.

Moving on to the special teams where Chase McGrath and Paxton Brooks are the returning starters at kicker and punter. The one surprise on the kicking game depth chart is Brooks beating out backup kicker Toby Wilson as Tennessee’s kick off specialist.

Wilson was the Vols’ kick off specialist a season ago.

While Tennessee returns its starting kicker and punter, they lost return specialist Velus Jones Jr. Jimmy Holliday is listed as the starting kick returner while either Dee Williams or Trevon Flowers will return punts.