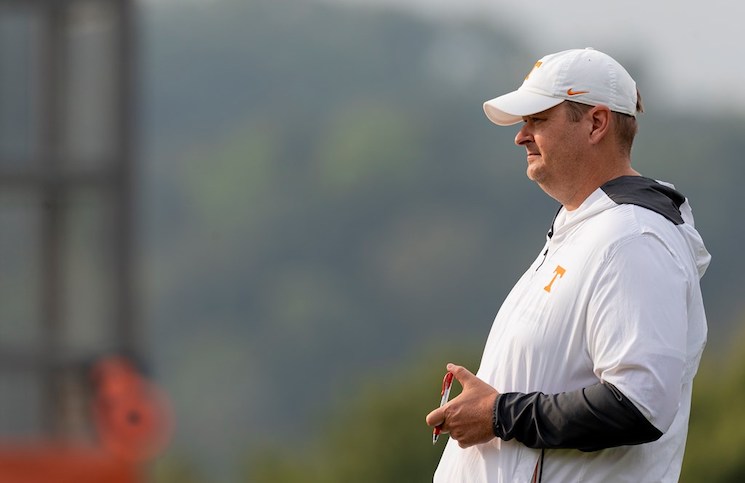 Here’s everything Heupel said ahead of the season opener.

Heupel opening statement: “Hey, everyone. Hope everyone is having a great day. Extremely excited. Game day is right here for us with us playing on Thursday night. We wrapped up our final preparation on the grass today and guys are in a great frame of mind. Love what our staff and players have done all throughout the course of training camp. It’s been really a time period where we’ve continued to grow in really every area and we’re at the point now where it’s time to go play. Excited to go compete with these guys and experience our game day environment and you can feel the energy on campus already today. Excited for the Vol Walk and being able to run through the T with this group of individuals. Ready to go compete with them.”

Question: What do you think of the VOLS block letters making their return in the south end zone?

Answer: I’ll tell you what, I’m actually looking at them right now from my office window. That’s one of the great things about being here. Its an iconic program with so much history. It’s important to me, our players and to our administration to fully embrace some of those historic things that are a part of our great tradition. From the VOL letters coming back, extremely excited everybody in our fanbase loves that. I’ve gotten a chance to see those go up over the course of the summer and they’re going to be a part of the new entrance and game day environment as we run through the T. I think our fans are going to absolutely love some of the new amenities inside of our stadium and our players are ready to go compete underneath that too.

Q: How difficult is it to balance the tradition and newness of things?

A: I don’t think it’s difficult. Our players, our staff, myself— we love the tradition. You want to be at a place that has those because of the winning tradition that they’ve had. The great coaches and great players that have come through here. Things that our fanbase absolutely latches on to. Our most important, most exciting thing we have a chance to celebrate as a football program. At the same time, being able to put new twists on things is important to our players. I think it’s important to recruiting too, but it’s fun and exciting and our fanbase absolutely loves some of the things we introduced last year too. Celebrating those iconic traditions here on Rocky Top and being able to introduce some new exciting things is a lot of fun and something I think everyone in our fanbase and everyone in our program enjoy.

Q: How much more have you been able to do with a full offseason of work with Hendon Hooker and how much do you need to diversify the offense after a year in the SEC?

A: Certainly have a great understanding when you know who your quarterback is. About what he’s comfortable (with), what he can handle and some areas where we could potentially grow in what we do offensively and things we can introduce because of his command of our offense. He’s been unbelievable this offseason. Extremely focused, great in his preparation. Spends a bunch of time watching film and that’s even before we get to game week. He’s in great command of what we’re doing so we’re continuing to grow inside of what we do and that’s because of Hendon, but it’s also because we’re a year into our system at Tennessee. That’s going to allow us to grow and try to attack defenses in a different way that maybe we were a year ago. Certainly, Hendon is a big part in that.

Q: How have Hooker and Cedric Tillman’s relationship grown this offseason?

A: You guys saw it grow over the course of last year. That’s only continued to grow. Those are two guys who represent, in my opinion, so many great things about what college athletics is all about. A year ago, nobody knew who they were at this point in time and man they took their opportunities and really grew over the course of the season. They’ve continued that path. There’s a ton of comfort for Hendon and our quarterbacks in general when targeting Cedric because they know he’s going to be in the right place at the right time. Coverages, he recognizes them so well. You can trust him in one-on-one situations because you know he’s going to attack the football from multiple places on the football field and even in tight coverages and some of the stuff we do underneath. There’s a lot of comfort as a staff, as a quarterback with Cedric and obviously those two guys have a great connection.

Q: Is it hard to judge how good of a tackling defense you have heading into this game tomorrow?