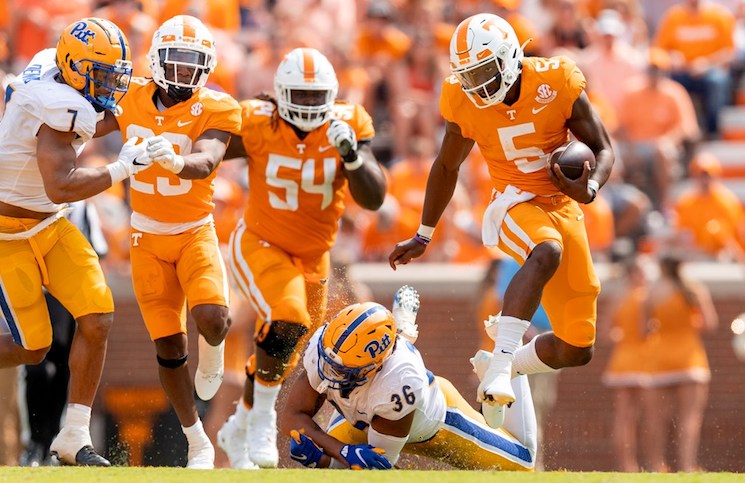 Tennessee heads to Pittsburgh Saturday looking to improve to 2-0 on the young season and avenge last year’s loss inside Neyland Stadium.

Note: Answers have been shortened and altered for clarity

Pitt is coming off a banner year for its program but finds itself back in the top 20 entering the week two matchup. What are the expectations and potential for this team?

If you ask anyone on the team their expectation is to be in the College Football Playoff. They look at last year, and while you can argue their strength of schedule wasn’t what a few other playoff teams were, they look at the two losses they had in the regular season to Western Michigan and Miami and those were both very winnable games. Games they should have won. Had that been the case they probably would have been in the playoff last year, so they feel that with all the talent they have returning and with a very similar coaching staff they have the capabilities to be one of the four teams playing for a championship at the end of the regular season and conference championship week. That’s their expectation.

My expectation isn’t too far off. I could see this team making its way into the College Football Playoffs simply because most of the years a team wins the ACC they’re in. Granted, that’s Clemson most of the time. I think this team is going to compete for an ACC title. It definitely needs to play better than it did against West Virginia in its opening game, but most teams need to step up their level of play from their first game of the season.

There’s a lot of talent, a lot of experience, some question marks but this should be at the very least, in my opinion, a nine win team.

Pitt played an important game in week one, coming from behind to beat West Virginia and win the Backyard Brawl. What did you learn from their season opener?

A lot of it went as I expected it to go, though I thought it would be lower scoring. I expected a little bit of a sloppy game, but what I learned is Pitt’s great strength is its defensive line depth. One of its captains Deslin Alexandre went down in the second quarter and the player who had the best game defensively — besides M.J. Devonshire who had the game winning pick six — was John Morgan who came in in Deslin Alexandre’s spot. He had some injury troubles last year but still earned honorable mention ACC honors. A guy who probably will get an NFL opportunity and he had a phenomenal game. He had a sack and I think three tackles for loss. He was in the backfield every play. He made a difference. He really did.

There are a lot of guys like Morgan who are on that roster and you can count on them to give huge reps when a captain goes down or if an All American like Calijah Kancey goes down. There will be guys ready and waiting to fill their spots.

Offensively, I thought they ran the ball okay. The offensive line needs to play a little better but overall I think they did a decent job. A lot of the sacks were probably on (Kedon) Slovis and not the offensive line. Slovis looked shaky but on his final drive of the game he marched them down 92 yards and went 5-for-5. I think there were some positives considering it wasn’t their best performance and they were able to gut out a win against a rival.

Pitt has a new offensive coordinator and new quarterback. How is its offense different this season?

There’s going to be a lot less throwing. Not to say that Slovis can’t sling the ball. I think his pocket awareness looked shaky to say the least, but he probably has just as good an arm as Pickett. There were some balls he threw, some tough plays on the sideline, and I think his best ball of the night was actually a deep ball to (former Tennessee defender Jerod) Bub Means and it fell through his hands right down the middle of the field. They can throw the football and probably will a little more against Tennessee.

(New offensive coordinator) Frank Cignetti was the coach, he took over in the Dion Lewis era of Pitt football after Lesean McCoy left. They had some of the best rushing attacks in the country his short stint here the first time. They loved to have a bell cow back. It was supposed to be Israel Abanikanda in this opening game but he wasn’t really going so they passed it over to Rodney Hammond Jr who had a phenomenal game. Those two are hard nosed runners. They’re physical but also have some speed to bounce runs outside. I think, regardless of how they play Tennessee, there’s going to be a lot of opportunities on the ground for the Pitt backfield this year. I think they’re also going to get the tight end involved a little more.

A bit of a more traditional offense compared to what you saw last year when they were throwing the ball a lot with Kenny Pickett and Jordan Addison.

Pitt prides itself on stopping the run but struggled in stretches against West Virginia. More evidence that that’s a one time blip or a serious issue?

Stopping the run is Narduzzi’s bread and butter. That pissed him off. He used the word ‘s**t’ like five times in his press conference Monday describing himself as a coach and their scheme and everything. He wasn’t happy.

What was weird was the guy who made all the plays — true freshman C.J. Donaldson — was listed as a tight end on West Virginia’s roster. They moved him to running back in camp. He’s huge and only touched the ball seven times but ran for 125 yards. Part of it, I do think, is they didn’t prepare to face a running back like that because how could you anticipate a 125 yards coming from a freshman tight end?

Another part of it was the zone blocking which they need to be better with. That comes with linebacker play. SirVocea Dennis, their middle linebacker, is a really good football player. I thought he played a solid game and came up with a huge sack on the final drive and I believe forced the 4th-and-16 on the final play for West Virginia. But their other two linebackers — a transfer from Notre Dame and a younger guy — did not look good against West Virginia and they’re going to need to be good against Tennessee.

More From RTI: Both UT And Pitt Facing Injury Concerns

Rodney Hammond Jr, I think, is a different story. If you look at the film he had a pretty nasty ankle twist. I don’t know if he’s going to play or not but he was listed when the new depth chart came out on Monday as the co-starter. Where he was second on the depth chart in week one, there’s an or between him and Abanikanda for the top spot at running back. Maybe that’s Narduzzi getting them to prepare for a running back that’s not playing. Maybe that’s simply saying this guy had a great game now he’s our starter. I don’t really know much more than that right now.

What’s one matchup/facet of the game that gives you confidence in Pitt?

I was really impressed with Pitt’s receivers last week. I say that knowing the Pitt receivers had a couple big drops and fumbled the football. I really think with a week of experience under his belt with this offensive line that Slovis will play better and I think he’s the type of player that will step up his game against a bigger challenge. I think the newness of Tennessee’s secondary gives Pitt opportunities. I like Pitt’s advantage with receivers against corners.

What’s one matchup/facet of the game that gives you confidence in Tennessee?

Hooker, if you look historically, has always played well against Pitt. When he was at Virginia Tech he played well against them and he almost led Tennessee to a comeback victory last year. I think having Hendon Hooker gives any team facing Pitt an advantage because he’s been an achilles heel for them. Pitt is very concerned about the high tempo offense Tennessee runs. They’re working very hard on making sure they’re set in the right spots when the ball is snapped because that was a problem against West Virginia and when you have a quarterback like Hooker in an offense that moves quick, that creates problems for a defense that didn’t do a good job of getting set Thursday.