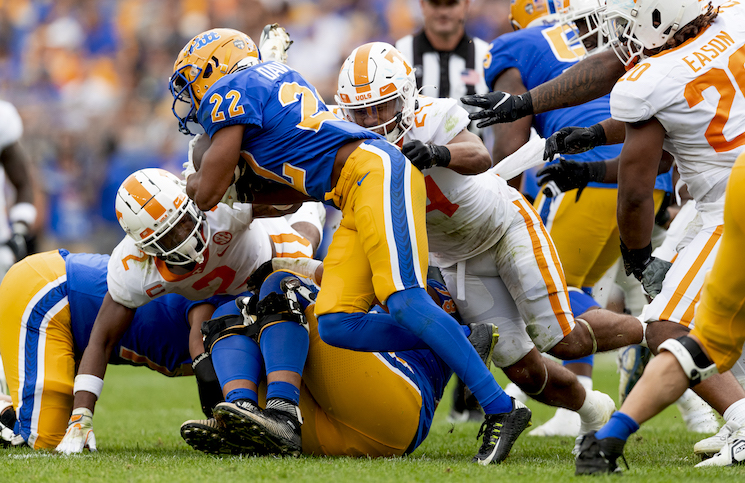 PITTSBURGH, PA — Pat Narduzzi and his defensive staff got the best of Josh Heupel and his offensive staff in the fourth between the two coaching staffs in the last five seasons.

Tennessee scored just 27 points in regulation — the lowest Heupel’s offense scored in all four meetings — and just three points in the second half.

It would have been hard to envision a Tennessee win if you knew those numbers before kickoff. But that’s exactly what happened.

Tennessee’s defense answered the bell in a huge way as the Vols hung on to beat Pitt, 34-27, in overtime at Acrisure Stadium Saturday afternoon.

As strong a game as it was for Tennessee’s defense, it did not start that way. Pitt scored on its first two drives and three of its first four drives.

“Coach (Tim) Banks told us in the first half, everything they got we gave to them,” edge rusher Byron Young said. “We had to bunker down, slow down, be patient and get our keys.”

The Vols one stop in that stretch was a critical Trevon Flowers interception in the end zone. With Tennessee trailing 10-0, Flowers’ interception gave the Vols life and led to their offense’s first touchdown drive of the game.

“We got our feet underneath us after that play,” Tennessee head coach Josh Heupel said.

The complete defensive turnaround had to wait one more drive as Pitt tight end Gavin Bartholomew hurdled Flowers on his way to a 57-yard touchdown.

From there, the Vols’ defense couldn’t have been much better. Tennessee stopped the Panthers’ on the three final drives of the first half including a Tyler Baron strip sack with under 30 seconds left in the half that set up a Volunteer field goal.

Baron injured Pitt quarterback Kedon Slovis on the aforementioned play and the Panthers’ offense couldn’t find a rhythm the rest of the game.

After averaging 7.6 yards per play in the first half, Pitt averaged just 2.9 yards in the second half and overtime.

“The defensive effort, just in general, absolutely relentless,” Heupel said postgame. “I said it early with the second, third and fourth quarter were as good as a performance as I’ve been around in a long time. They got put in a lot of bad positions from turnovers, short fields, special teams. They reset, they played. … I thought the overall effort from them was special.”

Tennessee’s relentless pass rush led the way for its defensive success. Defensive coordinator Tim Banks drew up an abundance of blitzes and sent pressure throughout the afternoon.

The Vols hit Slovis — and back up Nick Patti — over-and-over and made life difficult for them all game.

“They were physical in the front four and their pressures were relentless on the quarterback all night long,” Heupel said of his defense. “Even if we didn’t sack them, we were hitting them early in the ball game. Those were completions at times in the first couple of drives. I heard coach (Tim) Banks and coach (Rodney) G(arner) and I said it too, just keep coming. You’re going to get home eventually. I thought the overall effort from them was special.”

Tennessee totaled four sacks and a whopping 16 quarterback hurries in the overtime win. The last sack was the biggest. With Pitt facing third-and-goal at the eight-yard line, Flowers came unblocked off the edge to sack Patti for a 12-yard loss as the senior safety’s roller coaster night ended on a high.

“It was very rewarding,” Omari Thomas said of the pass rush success. “We knew that we had to come out here with a chip on our shoulder and affect the quarterback. Get hits, knock down balls, anything like that and I feel like we took a step tonight doing that.”

Josh Heupel has made Tennessee relevant regionally again with his high powered offense, but it was the defense that earned the second-year head coach’s second ranked win in his Tennessee tenure.